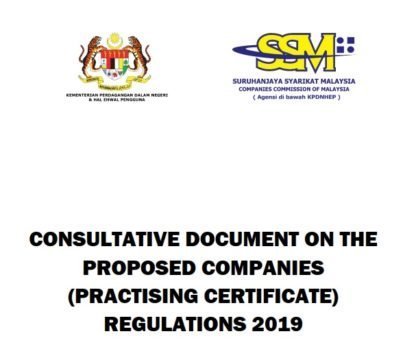 I set out a bit of history leading up to this important provision for registration of all company secretaries, and my observations on the Consultative Document.

Part A. History on the Need to Register and Monitor All Company Secretaries

As recognised by the CLRC, at common law, company secretaries are increasingly given wider recognition in the day-to-day management of the company. Company secretaries are also increasingly given recognition in their role in providing independent advice to the Board. They would advise the Board on the Board’s compliance obligations under the law and they play an important role in ensuring that good corporate governance standards are complied with by companies and their directors.

More recently, the Malaysian Code on Corporate Governance (2017) also recognises the responsibility of the modern day company secretary. The role has evolved from merely advising on administrative matters to now advising boards on governance matters. A suitably qualified company secretary possesses the knowledge and experience to carry out his functions. These may include knowledge in company and securities law, finance, governance, company secretaryship and other areas of compliance such as the listing requirements. The company secretary should undertake continuous professional development.

Part B. Section 241 and the Proposed Practising Certificate Regulations

I set out six observations on the new proposed Practising Certificate Regulations.

The validity of the initial practising certificate will be for a period of 12 months from the date of issuance – regulation 7(3)(a). Thereafter, for the renewal of the practising certificate, it will be for a period to be specified or such other longer period as SSM may allow – regulation 7(3)(b), 8(3). It is however not clear what will be the general renewal period, and would the renewal period constantly vary from case to case.

One wording to be clarified is under regulation 3(2)(d)(iii) referring to “does not have any pending legal action against him under any provision of the Act“. This may be too wide. Is this meant to cover only actions taken by a regulator such as SSM under any provision of the CA 2016 or the laws specified in the First Schedule of the Companies Commission of Malaysia Act 2001? If it is confined to such regulatory action, then it could be justified. But what if there are civil actions by private litigants such as companies or other third parties against the company secretary, but based on any provision of the CA 2016? Even if there were frivolous civil actions, that could prevent the registration or renewal of the practising certificate.

#3: List of Duties and Responsibilities of the Company Secretary

My general comment is that Part III of the Proposed Regulations are extensive in codifying the general duties and responsibilities of the company secretary. I am not sure if regulations are the proper method of setting out or paraphrasing from the CA 2016 such extensive duties. Ordinarily, such duties should be expressly set out in statute.

For example, regulation 13 sets out the duty in relation to the registered office and registers. Regulation 14 expressly sets out the company secretary’s duty to act honestly and use reasonable diligence, but also expands the express circumstances where such a duty arises. This would make it clearer as to when such a duty is breached. Some of these express duties now include advising the board of directors on its role and responsibilities, and advising the board of directors on statutory requirements and other disclosure and governance requirements. These duties may go beyond those expressly set out in the CA 2016.

Regulation 15 emphasises the company secretary’s duty as a reporting institution and to comply with the money-laundering reporting obligations. Regulation 16 sets out the duty to update prescribed particulars.

Regulation 18 will give SSM the power to determine the type, number of points, length of the training, and other requirements relating to continuing professional education.

In decisions where the practising certificate is not issued, not renewed or revoked, there is an appeal mechanism. Under Regulation 19, any aggrieved person may appeal to the Minister in writing within 30 days. The decision of the Minister is final. But legally, any such administrative decision would still be subject to the right of applying for judicial review.

Under Regulation 21, there is a general transitional period of 12 months from the commencement of the Proposed Regulations. This is to allow for all existing company secretaries to have this 12-month period before the need to obtain a practising certificate under regulation 4. Under regulation 21(2), SSM may extend the 12-month transitional period to any such longer period as SSM thinks fit.