One of the significant areas I have been regularly speaking on is the upcoming Companies Bill. The Bill will revamp our aging Companies Act 1965 and bring long awaited reforms to our corporate landscape.

At the recent Malaysian Legal and Corporate Conference on 7 October 2015, I gave a short interview to The Edge TV. 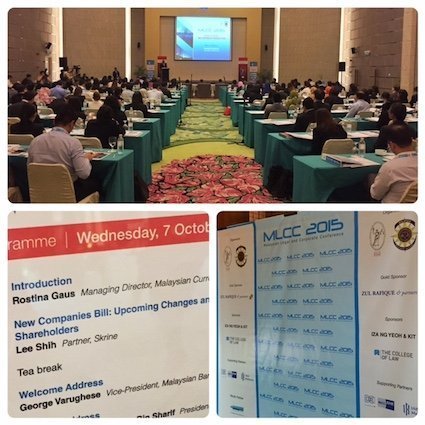 I was asked to give a very short summary on some of the changes we could expect in the law:

I highlighted how in future, private companies can have a single director and a single shareholder. AGMs for private companies will also be abolished. Under the present law, every company requires a minimum of two shareholders at incorporation and also a minimum of two directors. With the changes in the future, in line with other jurisdictions, it is hoped that this will make the company structure a more attractive business vehicle. It will be easier to incorporate, easier to maintain control over the company, and have less compliance cost each year without the need to hold an AGM.

The finalised version of the Bill has not been released yet but a public consultation copy was released in 2013. It has also been reported that the Bill will be tabled in Parliament in this October 2015 sitting.

I will next be speaking on the Companies Bill at the Boardroom-Malaysian Investor Relations Association Conference on 27 October 2015.

In future posts, I will upload some of my slides and also share on some specific areas of change.