The High Court in the Sulaiman & Taye decision (see the grounds of judgment dated 8 July 2020 of Ong Chee Kwan JC) deals with very significant issues in relation to fraudulent trading. Fraudulent trading is where directors of a company have to bear personal liability for the debts of a company in winding up. This is because the directors carried on the business of the company with the intent to defraud its creditors. In particular, whether the delinquent directors bearing personal liability then has to pay directly to the aggrieved applicant or to pay into the wound up company’s assets for the general benefit of all the creditors. END_OF_DOCUMENT_TOKEN_TO_BE_REPLACED

The Court of Appeal in the appeal involving Million Westlink Sdn Bhd (see the notes of proceedings of 21 July 2020 in the Court of Appeal Civil Appeal No. B-02(IM)-1590-08/2019) has confirmed that unsecured creditors have the right to be heard and to oppose the making of a judicial management order. The full grounds of judgment are not out yet.

When a company applies for judicial management, the company would be near insolvent. The company needs rescuing and an orderly dealing with its creditors. Hence, this Court of Appeal decision is important in clarifying that unsecured creditors have a right to appear and, if necessary, to oppose the making of the judicial management order. 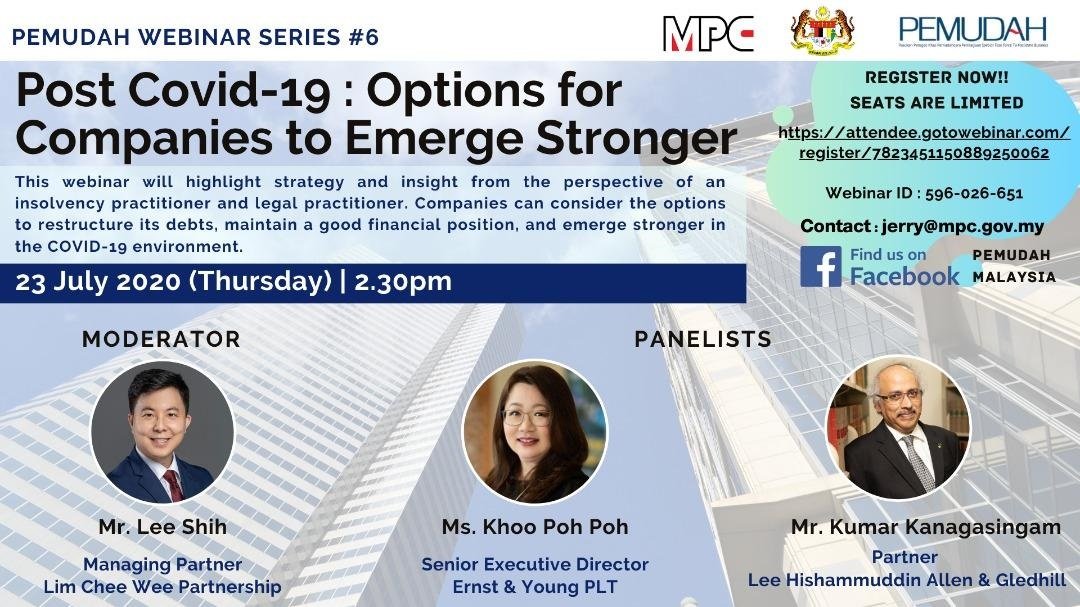 On Thursday 23 July 2020 at 2.30pm, I will be moderating this webinar on restructuring and corporate rescue. The webinar is organised by PEMUDAH, Malaysia’s Special Task Force to Facilitate Business.

I will be joined by the speakers PohPoh Khoo of Ernst & Young and Kumar Kanagasingam of Lee Hishammuddin Allen & Gledhill .

We will cover strategy and insight from the perspective of an insolvency practitioner and legal practitioner. Companies can consider the options to restructure its debts, maintain a good financial position, and emerge stronger in the COVID-19 environment.

Registration is free and you can register here. Seats are limited.

The Court of Appeal in Boulevard Plaza Sdn Bhd v Gas District Cooling (Putrajaya) Sdn Bhd [2019] MLJU 1965 allowed the receiver and manager’s application to compel a chilled water provider to continue with the supply of chilled water to the company under receivership. This is a far-reaching ability to compel the continuation of certain essential supplies. This decision would also apply to the situation of a judicial manager seeking for the continuation of such supplies.

END_OF_DOCUMENT_TOKEN_TO_BE_REPLACED

I will be chairing one of the events at the inaugural Thought Leaders 4 FIRE (Fraud, Insolvency, Recovery and Enforcement) event. It is the FIRE Asia Virtual 3-day event held on 29 June to 1 July. The topics will cover topics on fraud, asset recovery and insolvency.

You can join as a member and then attend the virtual for free. Sign up here.