On 12 September 2017, I was invited to be a speaker at the MAICSA Annual Conference 2017. This was on the Plenary Session 2 on Companies Act 2016 – Key Insights and Implications for Directors/Shareholders. It was moderated by my co-author and chartered secretary, Kenneth Foo. 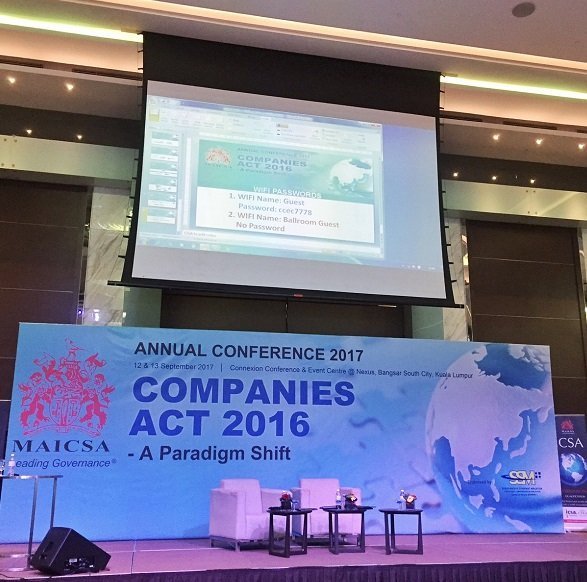 Having delivered my presentation, there were interesting questions from the floor as well as through my interactions with the audience members. I thought it would be useful to highlight 3 of the questions I received. They are an indication of the issues still concerning practitioners and companies .

A question was asked whether we could read the SSM Act together with the CA 2016.

The answer to this is that the SSM Act would still apply in relation to the CA 2016. We can read this from the provisions from the Interpretation Acts which apply to all written law. In particular, in my view, section 35(2) of the Interpretation Acts would apply for the situation where the CA 1965 has been repealed and then re-enacted as the CA 2016. This section provides that references in any other written law (here, the SSM Act) to the repealed law would now be construed as a reference to the re-enacted law, i.e. the CA 2016.

Eventually, it would be neater to also amend the First Schedule of the SSM Act to then update the reference to the CA 2016.

I was also asked about the source of SSM’s power to compound offences under the CA 2016.


In the past, section 371A of CA 1965 referred to the power of SSM to compound any offence committed by any person under the CA 1965. The procedure would be that SSM makes a written offer to such person to compound the offence by paying to SSM such sum of money within the time specified in the offer. Where the offence has been compounded, then no prosecution shall be instituted in respect of such offence.

The CA 2016 does not contain a section for compounding of offences. But there is instead the overarching power contained in the new section 38A of the SSM Act for SSM to compound offences. This particular section of the SSM Act came into force on 31 January 2017.

There is a slight modification on the power of SSM to compound offences now. SSM may compound any offence under the laws in the First Schedule of the SSM Act with the consent in writing of the Public Prosecutor. Further, the payment of the compound must not exceed 50% of the maximum fine for that offence.

There may be further refinement in the near future. Section 38A(5) of the SSM Act also states that the Minister may prescribe the offences that may be compounded and the procedures for compounding such offences.

My view is that section 206 of CA 2016 now provided for a default mechanism for removal of directors of both private companies and public companies.

In the situation of a public company, the framework was still the same as under CA 1965. A public company director could always be removed. This was mandatory and would override anything in the constitution. That would then require special notice, general meeting and a right for that director to make representations (reading sections 206(1)(b), 206(2), 206(3) and 206(4) of CA 2016).

For the case of a private company, there is now a default statutory method for removing directors. This is merely a default rule and this could be made subject to anything in the constitution. But where there was removal of a private company director under section 206 of CA 2016, then section 206(3) would require special notice and the general meeting.

However, if there was a removal of the private company director through other means, for example, under specific provisions of the constitution, then there was no removal of the director under section 206. So, the default mechanism requiring special notice and general meeting would not be activated. This is particularly relevant for companies with shareholders’ agreements and where the nominating shareholder would want to remove and appoint its nominated directors at will. This would not be a removal of a director under section 206 of CA 2016.