On 14 May 2019, I spoke at the Asset Recovery Asia Conference in Singapore. It was organised by Knect365 as part of its Asset Recovery series. I thoroughly enjoyed attending the conference, hearing from other fraud and asset recovery specialists, and meeting new friends. 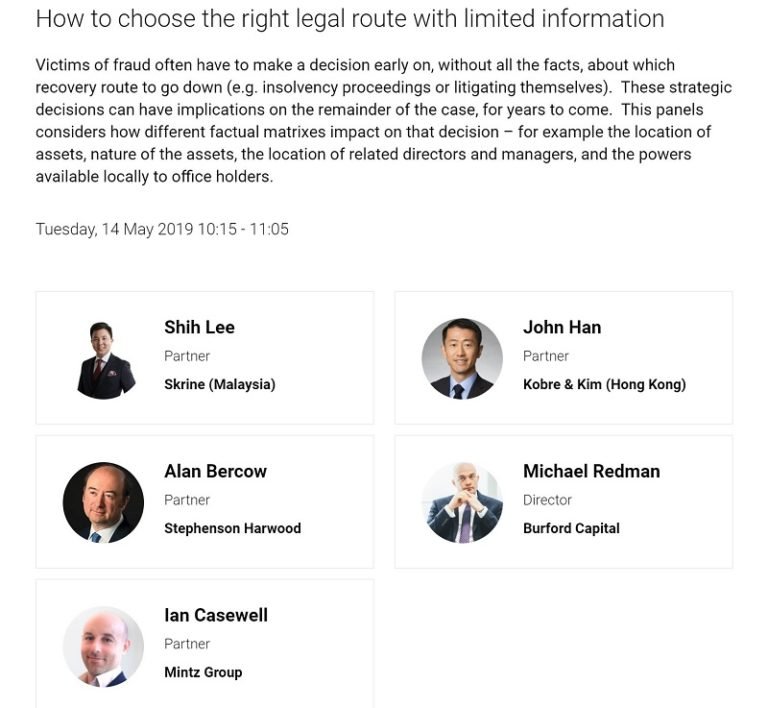 I shared a panel with other lawyers from different jurisdictions, an investigator and a litigation funder to share our perspectives. The session was on how victims of fraud have to make a decision early on, without all the facts, about which recovery route to go down – litigation or insolvency proceedings. These strategic decisions can have implications on the remainder of the case.  I set out below some of the views I shared on the panel session. Secondly, increasingly, there are more discovery orders being sought against banks for tracing fund flows. Such applications are grounded on the Norwich Pharmacal or Bankers Trust jurisdictions, and also the relatively new civil procedure provision allowing discovery against third parties. The Courts in Malaysia are hearing more and more of such applications. I have secured several of such Bankers Trust orders.

For now, the Malaysian Courts are unlikely to grant a stand-alone interim order in support of foreign court litigation. This point has not been fully tested in recent times. It is possible that a Malaysian Court may be prepared to follow the Singapore authorities such as in the Multi Code case to allow for such a stand-alone interim order. If so, the Writ action in Malaysia would be stayed pending the resolution of the foreign litigation. As the law now stands, there is only an express power to grant interim orders in aid of a foreign seat arbitration.

Often, liquidators may not consider exercising such powers as there is insufficient funding. Litigation funding in the context of insolvency has not yet been tested under Malaysian case and there is still a fear of common law champerty and maintenance.

I recently acted for a creditor to successfully obtain an application for private examination of the directors and officers of a wound up company. In my case, the creditor was prepared to still fund the litigation, while the liquidator had no objections to our application.

Recognition of a Foreign Liquidator Attempting to Recover Assets in Malaysia

Malaysia has not adopted the UNCITRAL Model Law on Cross-Border Insolvency. But there continues to be discussion among the stakeholders if Malaysia is to adopt the Model Law.

Nonetheless, there are statutory provisions that allow for the recognition of a foreign liquidator. Common law developments would also be persuasive in Malaysia. However, inevitably, a lot of business would be carried out or assets held by a Malaysian incorporated subsidiary or entity. So it is likely that a local liquidator would eventually need to be appointed.