Recent headlines have carried the news that the Malaysian Anti-Corruption Commission wants to have its own provision on beneficial ownership in the MACC Act 2009 to identify real owners of businesses or properties to further eradicate corruption. This is also against a backdrop of the Panama Papers, and the Paradise Papers.

There is already an existing provision in the Companies Act 2016 (CA 2016) that deals with beneficial ownership. But perhaps, it does not go far enough.

It is important to identify the beneficial owner of a legal entity such as a company, a trust or a partnership. This will ensure tax transparency, and help to fight against tax evasion and financial crimes such as money laundering or terrorism financing. The true controllers of companies will be brought out of the shadows. 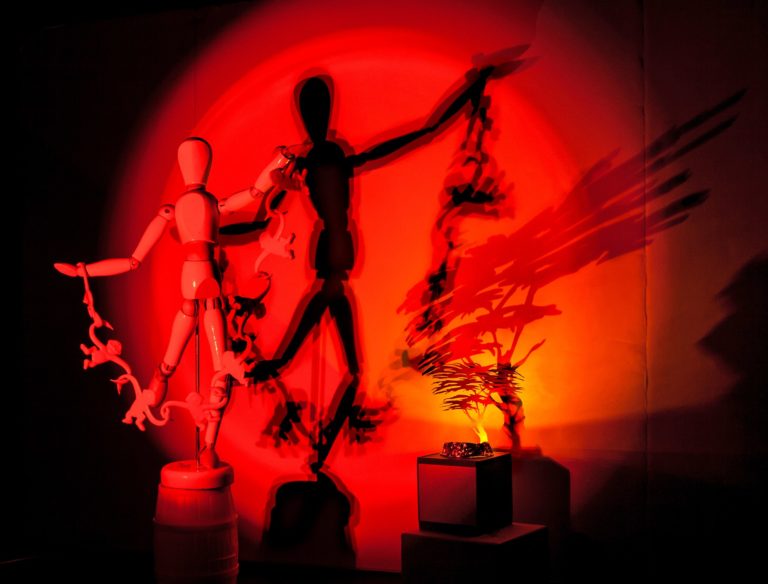 I set out some global trends, and I explain the existing Malaysian provision under the Companies Act 2016 (CA 2016) and the possible direction going forward.

[edit: On 8 November 2019, the Companies Commission of Malaysia issued its consultation document on the reporting framework for beneficial ownership. I have since written about it and with my observations over here.]

A useful starting point is to read the Beneficial Ownership Implementation Toolkit published in March 2019 by the Global Forum on Transparency and Exchange of Information for Tax Purposes and the Inter-American Development Bank.

The document also points out the international Financial Action Task Force (FATF) standard of defining beneficial ownership: “beneficial owner refers to the natural person(s) who ultimately owns or controls a customer and/or the natural person on whose behalf a transaction is being conducted. It also includes those persons who exercise ultimate effective control over a legal person or arrangement.” There is also the generally accepted threshold of 25% control for purposes of beneficial ownership.

The Fourth EU Anti-Money Laundering Directive came into force in 2015 and was due to be implemented in all EU countries by June 2017. The term ‘beneficial owner’ means any natural person(s) who ultimately owns or controls the customer and/or the natural person(s) on whose behalf a transaction or activity is being conducted. The beneficial owner will include at least the following:

For companies in particular: generally, a natural person who ultimately owns or controls the company through direct or indirect ownership of the shares or voting rights or ownership interest in that company.

Specifically, a natural person who holds shareholding or ownership interest of more than 25% shall be an indication of direct ownership. Where the natural person(s) control a corporate entity or multiple corporate entities which hold(s) more than 25% shareholding or ownership interest, that shall be an indication of indirect ownership.

The CA 2016 defines the term ‘beneficial owner’ as the ultimate owner of the shares and does not include a nominee of any description.

The next relevant provision is section 56 of the CA 2016. Section 56 has three key limbs.

The first limb is where the company has the power under section 56(1) to issue a notice in writing to a member of the company to provide confirmation whether the member holds any voting shares as beneficial owner or as trustee. If the member is holding it as trustee, then to disclose the identity and particulars of the beneficiary.

The second limb is where the company has the power under section 56(2) to issue a notice in writing to any other person who has an interest in any of the voting shares in the company. The notice to this other person will require the person to provide confirmation whether the person holds the voting shares as beneficial owner or as trustee. Similarly, if this person is holding it as trustee, to disclose the identify and particulars of the beneficiary.

The third limb is where the Companies Commission of Malaysia, a stock exchange or the Securities Commission can exercise its power under section 56(6). Such a regulator can issue a notice in writing to the company for the company to invoke its powers under section 56(1) or (2) and to immediately provide the regulator with the information obtained.

The failure to comply with the notice will result in an offence. But section 56 of the CA 2016 makes no reference to the penalty for the offence.

The general penalty provision under section 588 of the CA 2016 would apply. Upon conviction, the penalty is a fine not exceeding RM50,000 or a maximum three-year jail term or both.

If there has been a false or misleading statement made, this would carry a heavier penalty of a maximum 10-year jail term or a maximum RM3 million fine or both.

Finally, as part of each company’s annual return, there is a statement that requires confirmation that “none of the members of the company is holding shares as a nominee or trustee.” 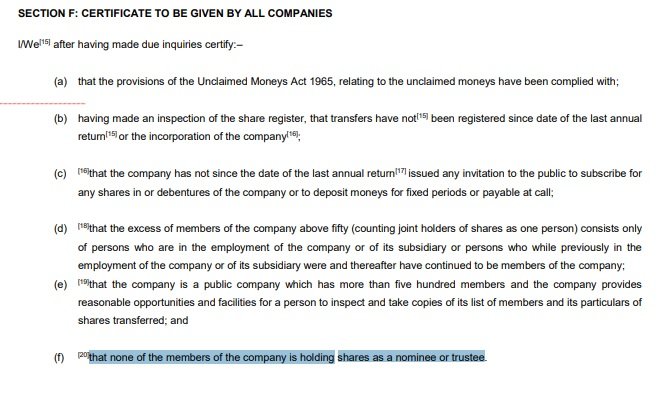 I next cover the possible way forward for Malaysia.

The Proposed Malaysia Model for Beneficial Ownership of Companies

At the recent Companies Commission of Malaysia National Conference 2019, session 9 was titled ‘Beneficial Ownership: Framework and Expectations‘. It outlined the seven proposals for the proposed beneficial ownership reporting framework.

#1: Definition of Beneficial Owner – All Companies (except for companies limited by guarantee)

An individual is deemed to be a beneficial owner or have control over a company if the individual satisfies one or more of the tests below:

#2: For Companies Limited By Guarantee (CLBG)

An individual is deemed to be a beneficial owner or have control over the CLBG if the individual satisfies one or more of the tests below:

#3: Scope of Reporting – Companies and Foreign Companies under the CA 2016

The exempted entities are listed companies on any local or foreign stock exchange, and financial institutions.

Access to the information will be allowed to: competent authorities and law enforcement agencies, the beneficial owner whose name has been entered in the company’s register of members, and the legal owner of the shares where the beneficial ownership has been disclosed.

Significantly, it is proposed that the Companies Commission of Malaysia will invoke the power under section 56(6) for all existing companies to have a blanket disclosure of beneficial ownership from its members and to notify the Companies Commission. It is envisaged that this will be invoked six months from the effective date of this new framework.

Finally, it will be the duty of the company secretary to ensure that the beneficial ownership information is lodged, accurate and up to date. This seems like an onerous duty. This duty would also be read together with the duties imposed under the Guidelines Relating to Practising Certificate for Secretaries under Section 241 of the Companies Act 2016.

It shall also be the duty of the company to keep supporting documents as the basis for the verification of information.