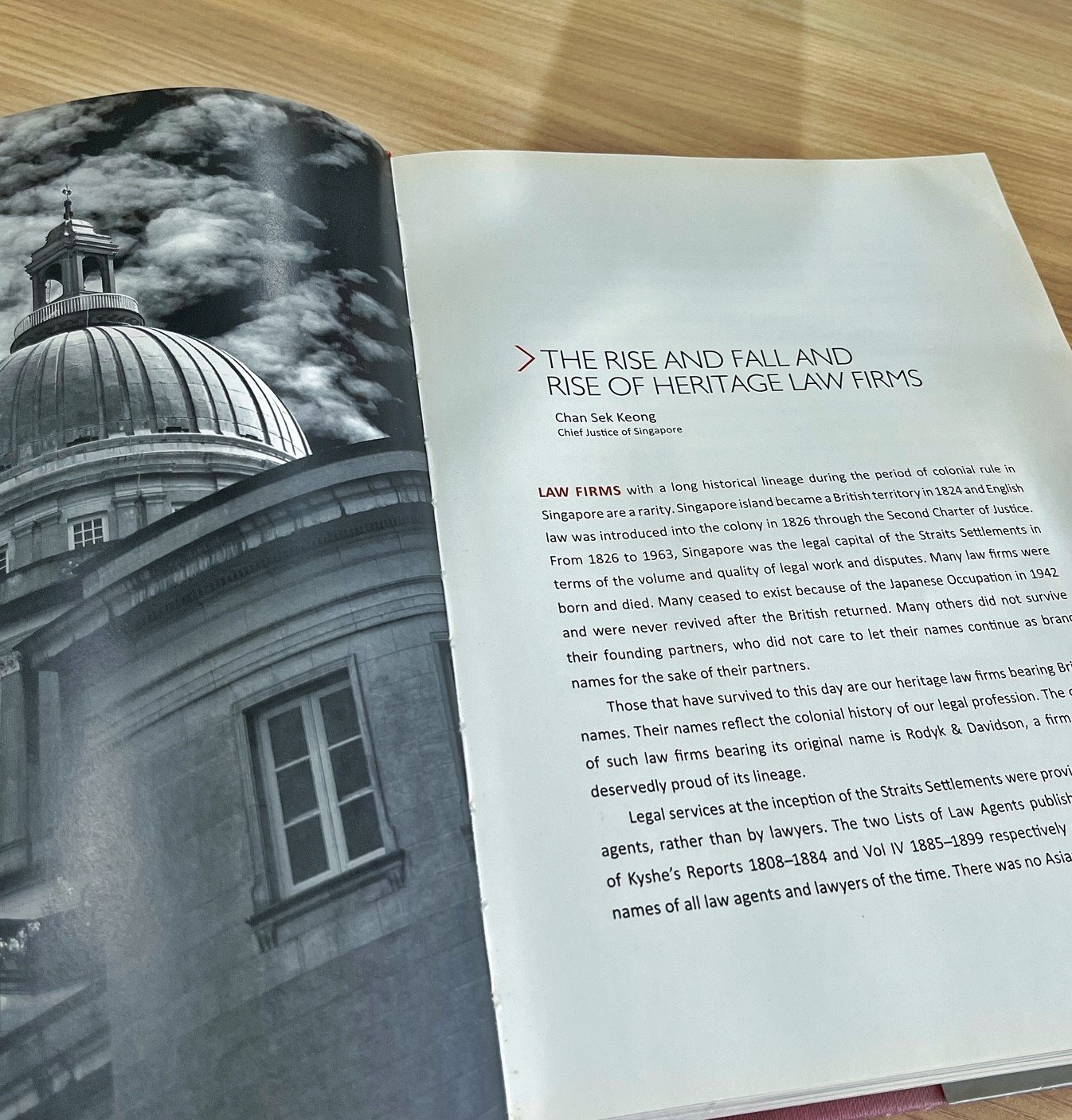 I am in the midst of reading books relating to law firms. I am now re-reading the book Rodyk: 150 Years, published in 2011. An excellent read.

The book documents the 150-year history of the Singapore heritage law firm, Rodyk & Davidson. The firm lost some of its lustre and then entered a historic merger with HelenYeo & Partners, a mere 10-year old law firm. It was a merger of equals and transformed the firm.

In a series of posts, I will feature some of the extracts from the book of Rodyk: 150 years. I weigh in with lessons for law firms, professional practices and for businesses.

I start with the book’s introduction penned by Chan Sek Keong, who was then the Chief Justice of Singapore. It was also published in the Singapore Business Times.

LAW firms with a long historical lineage during the period of colonial rule in Singapore are a rarity. Singapore became a British territory in 1824, and English law was introduced into the colony in 1826 through the Second Charter of Justice. From 1826 to 1963, Singapore was the legal capital of the Straits Settlements in terms of the volume and quality of legal work and disputes. Many law firms were born and died. Many ceased to exist because of the Japanese Occupation in 1942 and were never revived after the British returned. Many others did not survive their founding partners, who did not care to let their names continue as brand names for the sake of their partners.

Those that have survived to this day are our heritage law firms bearing British names. Their names reflect the colonial history of our legal profession. The oldest of such law firms bearing its original name is Rodyk & Davidson, a firm that is deservedly proud of its lineage.

Legal services at the inception of the Straits Settlements were provided by law agents, rather than by lawyers. The two Lists of Law Agents published in Vo1 1 of Kyshe’s Reports 1808-1884 and Vol IV 1885-1899 respectively contained the names of all law agents and lawyers of the time.

Our most famous criminal lawyer David Marshall practised under various firms and finally formed David Marshall & Partners. Unfortunately, most of these names are now history.

In 1968, the Directory of Law Firms in Singapore published in Vol 1 No 1 of the Singapore Law Review listed the following firms which could be said to be heritage law firms, namely Allen & Gledhill, Battenberg & Talma, Braddell Brothers, Donaldson & Burkinshaw, Drew & Napier, Wee Swee Teow & Partners, Eber & Tan, Murphy & Dunbar, and Rodyk & Davidson. When I started practice in Singapore in 1963, only three of the firms named above were headed by Asian lawyers; the rest were still headed by British expatriates. The last expatriate lawyer to leave was apparently LAJ Smith.

Currently, only three of these heritage law firms are among the largest law firms in Singapore, having made the transition successfully after full localisation, with leadership and vision. Many law firms continued to survive on brand name and past goodwill for a short time. Even the best of law firms will suffer the same fate without successive generations of new blood and talent in the new legal environment.

Globalisation of legal services has allowed foreign law firms to claim a natural right to supply to all, without hindrance. Singapore law firms now face international competition domestically, and even greater challenges abroad. Rodyk’s recent history provides a valuable lesson on how to keep our heritage law firms alive and prosperous. It was once the pre-eminent law firm in Singapore, but its star began to fade in the 1980s through lack of leadership and fresh legal talent, amid the dynamic economic changes taking place in Singapore and in the region.

It lost its lustre and became a pale shadow of its former self. Its illustrious past was what it was, past. Fortunately, through a merger with HelenYeo & Partners and acquisitions of new talent, a new generation of able lawyers with foresight and vision emerged with the aim of regaining the firm’s former eminence and prestige. Singapore needs more and larger law firms with the talent, ability and desire to compete both in Singapore and in Asia. In this quest, some of our other heritage law firms can take a leaf out of Rodyk’s experience. Embrace change; discard the culture of seniority ranking of partners; seek fresh talent wherever they may come from; and share profits equitably. Rodyk is now doing all of these things – it has found the elixir of professional life and is deservedly celebrating the 150th anniversary of its founding. Rodyk has my congratulations and best wishes.

In Malaysia, we can see our own rise and fall of heritage law firms.

Here is a list of Malayan law firms prior to the independence of Malaya (and now Malaysia). This list was compiled by Foong Cheng Leong. In Kuala Lumpur alone, we see names like Freeman & Madge, Shook Lin & Bok, Lovelace & Hastings, Bannon & Bailey, Shearn Delamore & Co, Sanders and Co, Hewgill & Day, and Joaquim Brothers.


Similar to Singapore, how many of Malaysia’s heritage law firms are now among the largest law firms in Malaysia?

There are the large firms of Shearn Delamore & Co and Shook Lin & Bok.  Skrine was formed in 1963 after the partners of Bannon & Bailey dissolved the firm and established Skrine. Allen & Gledhill was ultimately absorbed into Lee Hishammuddin Allen & Gledhill in 2005.

As posed by Chan Sek Keong, how many firms have lost their lustre and become a pale shadow of their former selves? Is the elixir of everlasting professional life down to a few secret ingredients?

Embrace change. Discard the culture of seniority ranking of partners. Seek fresh talent wherever they may come from, and share profits equitably.

Let us explore these points in upcoming posts.