The Companies Commission of Malaysia (SSM, being the Malay abbreviation) maintains a useful FAQ page on the Companies Act 2016 (CA 2016) and other transitional issues. This page is updated from time to time. The FAQ is stated as being for general reference. The document does not have legal force. The issues and answers may ultimately have to be tested in the courts.

I touch on two recent updates as at 7 August 2019 dealing with voting on preference shares and meetings of a single-member public company.

#1: Holder of Preference Shares Having a Right to Vote

Under the FAQ for Shares, there is a question and answer relating to the right to vote of a holder of a preference share: 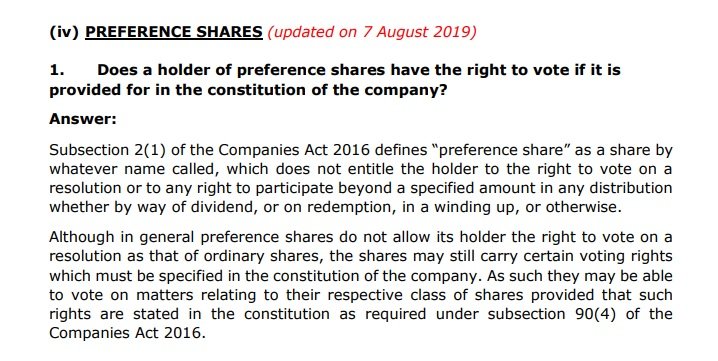 Applying the strict definition of section 2(1) of the CA 2016, it must be that the holder of a preference share does not have the right to vote on a resolution or to any right to participate beyond a specified amount in any distribution. This must also be consistent with the reading of section 90(4) of the CA 2016 where the constitution rights of a holder of a preference share deal with only repayment of capital, participation in surplus assets and profits, dividends, voting and priority of payment of capital and dividend in relation to other shares or other classes of preference shares.

The proviso to section 148(2) of the CA 1965 allowed the holder of the preference share the right to attend any general meeting and to vote if essentially the preferential dividend was in arrears and unpaid, if there was a resolution which varied the rights attached to such shares, or upon any resolution for the winding up of the company.

The above rights to vote present under section 148(2) of the CA 1965 would be a useful right for preference shareholders to exercise. If the CA 2016 were to be amended in the future, it would be helpful for the definition of preference share to make clear whether the definition in section 2(1) of the CA 2016 is to be all encompassing or whether there would be a general definition and subject to exceptions. There could also be a consideration on whether to reinstate the equivalent wording of section 148(2) of the CA 1965.

#2: Meeting of a Single-Member Public Company

Under the FAQ for Meetings and Decision Making, one question deals with the issue of resolutions to be passed by a wholly-owned subsidiary and where that subsidiary is a public company. There is no ability for that single-member public company to pass a written resolution. 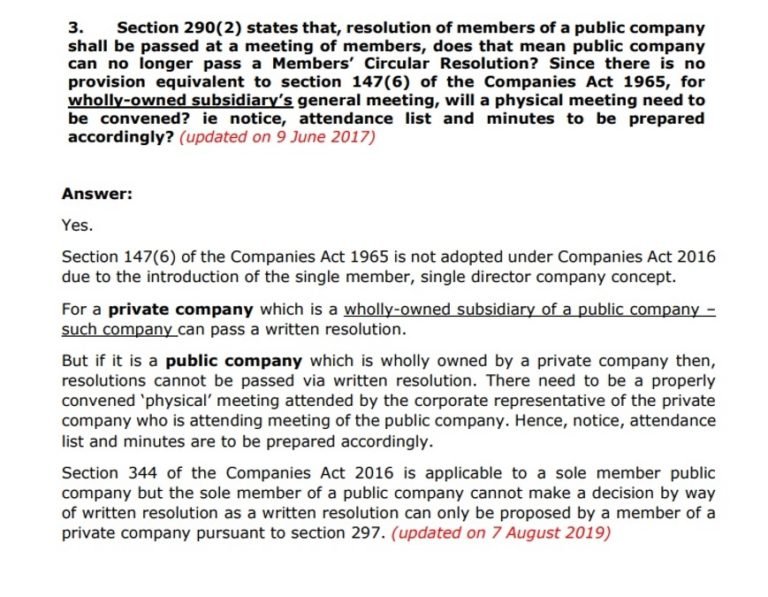 The history of this is that section 147(6) of the CA 1965 allowed a very easy mechanism for all wholly-owned subsidiaries (regardless of whether that subsidiary was a private or public company). The holding company of the wholly-owned subsidiary could essentially sign a minute and that would authorise any act, matter, thing or resolution as if passed at a general meeting.

The CA 2016 now sets out two different mechanisms, even for the case of wholly-owned subsidiaries. Both of the mechanisms are not as easy as signing the minute under section 147(6) of the CA 1965.

I suspect the query relating to section 344 of the CA 2016 is due to queries whether section 344 of the CA 2016 could be used as a workaround for the need for a general meeting. Section 344 states that where a sole member of a company takes a decision (that may be taken in a meeting of members or has effect as if agreed in a meeting of members), that member shall provide the company with details of that decision.

What we have is that even in the situation of a wholly-owned subsidiary within the corporate structure, time and expense are still required for the paperwork of having a physical general meeting.