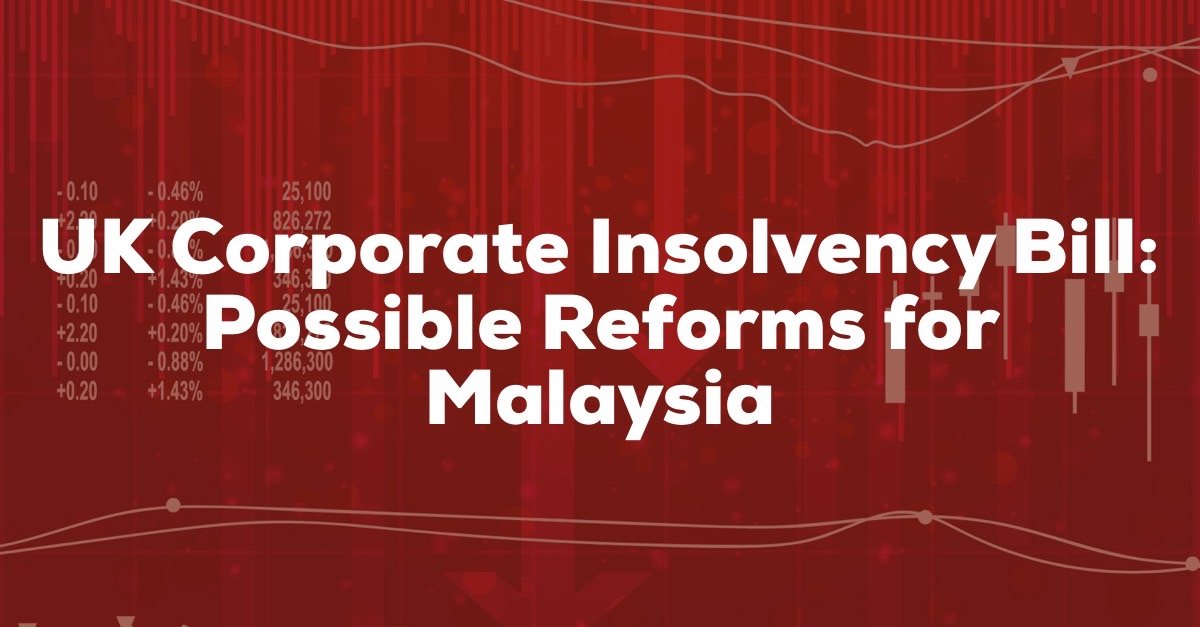 In response to COVID-19, the UK has fast-tracked its Corporate Insolvency and Governance Bill (the PDF copy of the Bill is here and with helpful Explanatory Notes). The overarching objective of this Bill is to provide businesses with the breathing space they need to continue trading during this difficult time and to avoid insolvency. I set out seven of the key measures that UK is introducing and the possible reforms that Malaysia can adopt.

The Bill introduces a unique stand-alone moratorium mechanism. Ordinarily, a moratorium to stay legal proceedings and creditor actions would be part of a restructuring or rescue process. So for example, in the UK, moratoriums can be obtained in the administration process or through the CVA.

Now, the debtor company can obtain a free-standing moratorium in order to secure breathing space. The debtor can use the time to engage with its creditors informally, or for the debtor to pursue formal court restructuring processes.

This stand-alone moratorium will allow the directors to still be in control i.e. a debtor-in-possession moratorium process.

A debtor company in Malaysia can only obtain moratorium protection when the company undertakes one of the restructuring or rescue processes under the Companies Act 2016 (CA 2016).

First,  a restraining order in a scheme of arrangment. This requires an application to the court and with difficult pre-conditions to be met. One of the conditions effectively already requires substantial creditor support for the creditor-nominated director to be appointed.

Second, Malaysia’s CVA triggers an automatic moratorium upon the filing of certain documents. Unlike the UK CVA, Malaysia’s CVA will have mandatory moratorium protection. There will be the initial period of 28 days for the CVA proposal to be tabled. Unlike in the UK, there is nothing to prevent a company from triggering a second or third or further CVA process.

What could be the possible reform for moratorium protection?

To promote a debtor-in-possession model with moratorium protection. This can be via the restraining order in a scheme of arrangement. The scheme of arrangement offers flexibility of being used by SMEs and public-listed companies. Allow the debtor company to have a time-limited automatic moratorium upon the filing of the restraining order application. This can be similar to the Singapore’s section 211B moratorium. The application can made subject to appropriate disclosures and safeguards. As I explain next, the further safeguard is by adopting a monitor role.

#2: Safeguard for Moratorium – the Monitor

The UK moratorium has a safeguard to protect creditors’ interests. An insolvency practitioner must be appointed as a monitor. The monitor is required to assess throughout the moratorium whether the rescue of the company as a going concern is still likely. The monitor will also approve sales of assets outside the ordinary course of business, and to approve the grant of new security over the company’s assets.

But as stated above, the company’s directors continue to manage the business and the directors will still be in control.

To adopt this monitor role as part of the grant of a restraining order. An insolvency practitioner will be appointed as an officer of the court. The law can clearly spell out the responsibilities and reporting obligations of the monitor. But the monitor will not step in to displace the day-to-day running of the company.

Malaysia does not have this ability to have a cross-class cramdown.

For Malaysia to adopt a similar mechanism of a cross-class cramdown. This would also follow Singapore’s approach when Singapore improved its scheme of arrangement provisions.

To have a wider application of suspending termination clauses or ipso facto clauses if the company undertakes a rescue or restructuring process.

The Bill will temporarily suspend the directors’ liability for wrongful trading. This will take place from 1 March to 30 June 2020, or one month after the coming into force of the Act (whichever is later).

Malaysia continues to have the criminal offence of insolvent trading under section 539(3) of the CA 2016.

#6: Temporary Restriction on Winding Up Petitions

The Bill temporarily restricts the presentation of a winding up petition based on an unsatisfied statutory demand. There are also further restrictions for presenting other types of winding up petitions. The period of suspension is generally between 1 March 2020 to 30 June 2020, or one month after the coming into force of the Act.