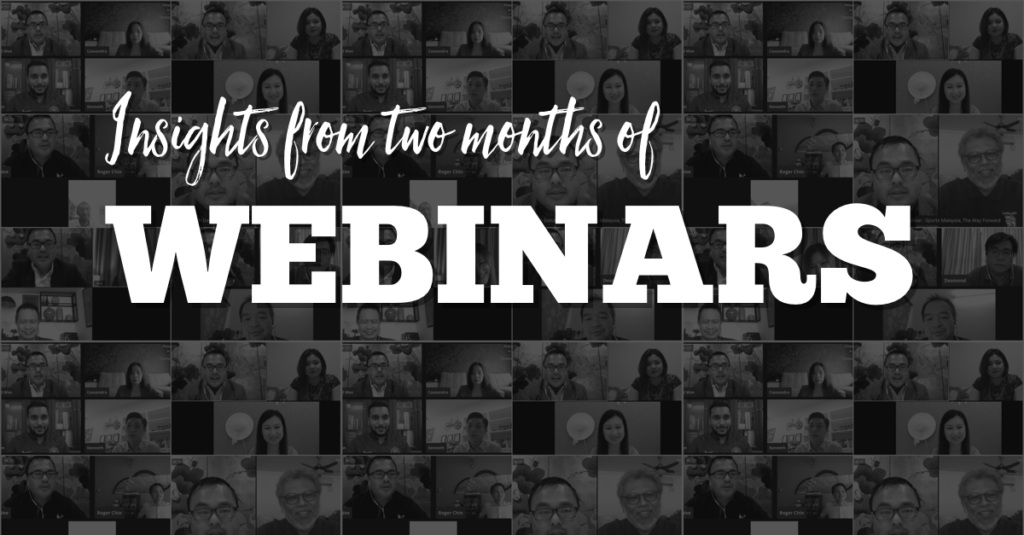 1. What prompted you to start hosting webinars? Tell us about the first webinar you hosted during the MCO.

Permit me to start by first thanking the TML founders, Lee Shih and Marcus, for this interview.

At the beginning of the MCO, on 18 March, there was a sense of uncertainty among Malaysians. I thought hosting webinars to discuss the impact of the pandemic on certain areas of commerce would generate some sense of direction. The aim of each webinar was to offer some sort of solutions.

We started the first webinar after a week of planning and testing the system. The inaugural webinar — “Impact of the Pandemic on Sports Business” — was held on 2 April 2020. We invited two speakers involved in the business of sports, and they shared some observations about the impact on sports, offering plenty of ideas moving forward.

That first webinar, which had more than 70 registered participants, was in collaboration with BAC, who kindly shared their Zoom conferencing app with us.

As a result of the positive feedback from the speakers and participants, RWC decided to host more webinars, some in collaboration with BAC, and some on our own which were broadcasted on our Facebook page.

2. How many webinars have you hosted? Has the response been better or worse than you expected?

We have so far hosted 24 webinars. The response has been encouraging. We continue to receive positive feedback from participants, and in fact some of the topics were chosen at the request of members of the public. We are happy that the webinars have had an impact, and that viewers have been able to pick up an idea or two from the discussions.

We did anticipate a significant number of viewers, since people would be stuck at home during the MCO, and would probably want to watch or participate in something online. So that expectation turned out to be accurate.

3. Which topics generated the most interest?

Unsurprisingly, the webinars related to employment issues generated a lot of interest. With the economy at a halt due to the MCO, losing jobs, retrenchments, or pay cuts were obvious concerns. We held two separate webinars on employment law to cater for the demand.

However, the webinar with the highest viewership was on “Commerce of Esports” with over 11,700 views.

We have covered a broad range of topics in our webinars, including the following:

4. What is your typical webinar setup?

I usually just rely on my Macbook to host the webinars. When collaborating with BAC, we use their Zoom account, and for those we host on our own, we use StreamYard to broadcast on Facebook.

So far, I have moderated the webinars from my home, sitting in front of a classic room divider which has been mounted on the wall.

I rely on my home broadband internet connection, but always have my mobile phone’s hotspot switched on to ensure continued internet connection. I also ensure my Macbook battery is fully charged beforehand, so that in the unlikely event there is a blackout midway through the webinar, the laptop will continue to operate.

We haven’t had any technical issues so far, except for one webinar when we could not connect Zoom to broadcast to Facebook.

5. What have you found are the ingredients for a successful webinar?

It’s important to understand what the viewers want to learn or find out about. Once we have a rough gauge of the demands of the viewers, we will start looking for speakers. We always set out to find speakers from different sections of the same industry, so they can offer alternative viewpoints or different ideas.

However, we have had some webinars which were in a one-to-one format, mostly involving sports leaders, athletes, or well-known sports personalities.

Our favoured format has been a talk-show style, where the webinar is in effect a continuous dialogue. We usually conduct a warm-up session a few days before the actual webinar, where speakers provide input on how and what they wish to say. As the moderator, we will then plan and chart a flow for the actual discussion by preparing relevant questions or highlighting particular issues.

From my experience, a one-hour webinar would suffice, though most of our webinars have gone on for an extra 10-20 minutes. That duration includes a question-and-answer session at the end.

6. What are some mistakes you and your team made along the way, and how have you learnt from them?

I don’t recall any major errors or mistake done when organising the webinars. Of course, there were occasional teething issues, but we have been blessed with fairly smooth running webinars.

It’s really important to give yourself sufficient time to plan and organise the webinar. This allows you to change things if needed. We usually plan every webinar about a week ahead of actual webinar. After choosing the topic, we approach the speakers who usually confirm (or turn down) participation within a day or two. Once the date and time and speakers are confirmed, we design an e-flyer and upload them onto RWC’s social media channels on LinkedIn, Facebook, Instagram, and Twitter. We also share the invites via email and WhatsApp.

After every webinar, we try to upload the video on the RWC YouTube page, which has received an encouraging response.

7. Would you encourage lawyers or law firms to host their own webinars?

Of course. Members of the Bar should explore this avenue to assist members of the public. It is an effective way to reach out to the people. Prior to COVID-19 and the MCO, we were already hosting pro-bono community seminars, talks and trainings at our office premises. Moving this online required some adjustment, but we have adapted very quickly and have managed to host a lot of webinars in a short time. I definitely encourage other law firms to host their own webinars.