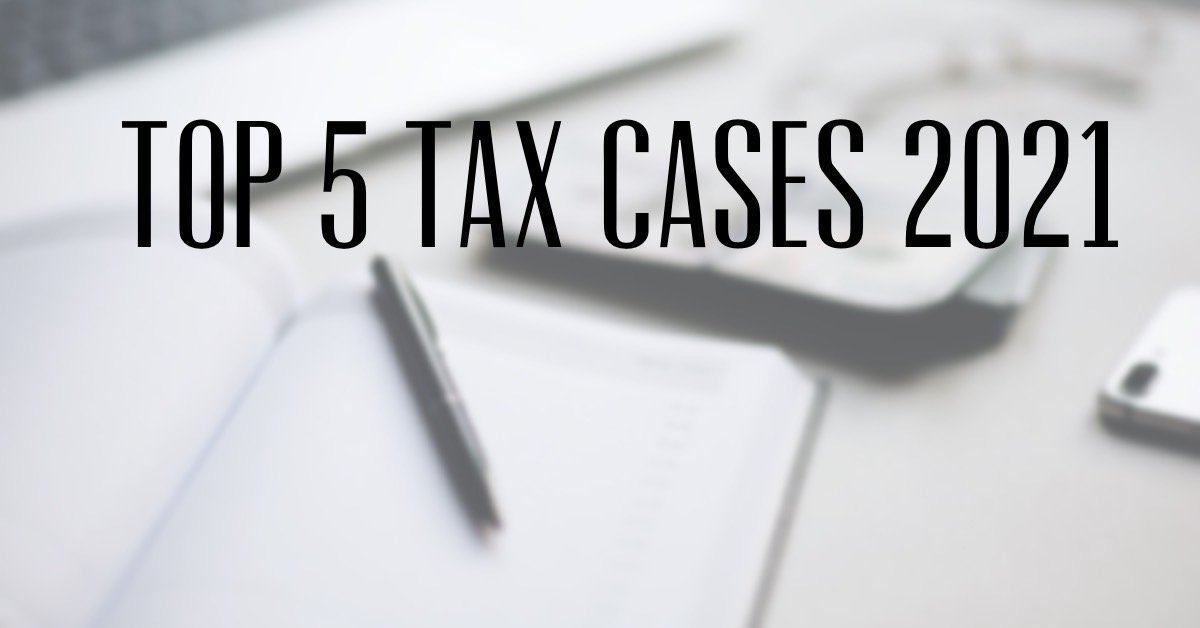 Our guest writer, Khong Siong Sie, writes on the top 5 tax cases in Malaysia for the year 2021.

The main issue was whether real property gains tax (RPGT) is payable upon the disposal of shares in a company whose total tangible assets consist mainly of land. The case dwelled primarily in the construction of revenue legislation and interpreting Paragraph 34A of Schedule 2 of the Real Property Gains Tax Act 1976 (RPGTA).

In determining a real property company (RPC) under Paragraph 34A of Schedule 2 of the RPGTA, the Court of Appeal held that an RPC is as defined, and not based on the intention or objective of a person who acquired or disposed of shares in such a company. The company turns into an RPC once the defined value of its real property and/or shares in RPC exceeds 75% of its total tangible assets. The intention and purpose for acquiring the shares in the company are irrelevant.

This case put to rest the ghost of Binastra Holdings Sdn Bhd v Ketua Pengarah Hasil Dalam Negeri [2001] 5 MLJ 481. In Binastra, the High Court accepted the taxpayer’s argument that the intention for acquiring the shares in the company is relevant and that the lands were held by the company as stock in trade and not as real property. The tax authority appealed in that case and the Court of Appeal overruled the High Court decision in Binastra. But no grounds were made available. We now have the Court of Appeal in Continental Choice setting out its grounds in determining an RPC.

This decision provides certainty on the deductibility of payment to state authorities as a condition for permitting the property developers to sell bumiputera units to non-bumiputera purchasers. This issue was first decided in Prima Nova Harta Development Sdn Bhd v Ketua Pengarah Hasil Dalam Negeri (Kuala Lumpur High Court Case Number: WA-14-7-12/2019); however, the grounds of judgment in that case were not available.

In this appeal, the High Court reversed the decision of the Special Commissioners of Income Tax. The High Court held that the payment to the state authority to obtain the release of bumiputera quota (Payment) is directly related, incidental, and relevant to the Appellant’s principal activity in its entirety as a property developer. Without such Payment, the Appellant would not have been able to sell the bumiputera units to the non-bumiputera purchasers and generate its income – hence such Payment is wholly and exclusively incurred in the production of the Appellant’s gross income.

Further, the Court held that such Payment is neither capital nor penalty in nature. It is simply a normal business payment to produce income. Therefore, it was wrong for the tax authority to characterise such Payment as a penalty and subject it to restriction under section 39(1) of the Income Tax Act 1967 (ITA), which expressly provides for the disallowance of the deduction of penalty. Moreover, nowhere in the circular issued by the state authority states the payment for the release of bumiputera quota as a penalty.

The tax authority has appealed to the Court of Appeal.

In 2014, the tax authority raised four tax assessments (Notices) on the company for the years of assessment (YA) 2001 to 2004. The Notices were served on the company but not the directors. The tax authority proceeded with civil recovery actions and was granted judgment in default against the company. However, the High Court dismissed the claim against the director for YA 2001 to 2003 and only granted it for YA 2004 because she was only made a director in December 2003.

Dissatisfied, the tax authority appealed against the partial judgment. The Court of Appeal made, among others, three crucial findings:-

Despite the above, the director was still liable for YA 2004 as she magnanimously did not appeal against the High Court’s finding. In defending a civil recovery suit by the government, many may overlook the argument on proper service of notice of assessment on the director personally.

This is the first case on the interaction between the protection of personal data afforded by the Personal Data Protection Act 2010 (PDPA) and the powers granted to the tax authority under the Income Tax Act 1967 (ITA) to request such personal data.

Without commencing any investigation, the Director-General of Inland Revenue (DGIR) requested the entire database of Genting Malaysia’s customers’ personal data. The DGIR wanted to gather big data to enlarge its tax base. The DGIR’s request was subsequently revised to personal data of selected individuals with transaction values above a certain threshold.

Despite Genting Malaysia’s protestation that such requests did not comply with the PDPA, the DGIR persisted. To make matters worse, the Deputy Personal Data Protection Commissioner took the position that: (i) the ITA empowers the DGIR to request such information; (ii) the PDPA allows the disclosure of personal data required or authorised by any law; and (iii) such disclosure does not contravene the disclosure principle under the PDPA.

Genting Malaysia commenced a judicial review against, among others, the DGIR, the Personal Data Protection Commissioner, and his Deputy. The judicial review challenge was on the basis that the PDPA allows disclosure only if such disclosure is necessary to prevent or detect a crime or for investigations. However, the DGIR had not commenced an investigation. The personal data requested were intended for the tax authority’s data warehouse to broaden its tax base. Hence, the DGIR’s request for information did not fall within the PDPA exception.

On 27 July 2021, the High Court ruled in favour of Genting Malaysia. At the time of writing, the grounds of judgment are yet to be available. This matter is pending before the Court of Appeal.

This decision characterises the interplay between the evidential provisions in Section 142(5) of the ITA and the solicitor-client privilege provided under Section 126 of the Evidence Act 1950 (EA).

Second, the solicitor-client privilege in section 126 of the EA covers three identifiable classes of information, namely:

Under the term ‘communication’, financial information or data exchanged between an advocate and his client, and any such data contained in any document and kept in respect of the client’s account for the advocate’s employment as an advocate, would fall within the ambit of solicitor-client privilege.

This decision is pending before the Federal Court. For now, the sanctity of solicitor-client privilege on clients’ accounts remains.

Siong Sie is the tax partner at the law firm Jason Teoh & Partners. He is ranked as a leading tax practitioner in Malaysia in Chambers Asia-Pacific 2020 – 2022.