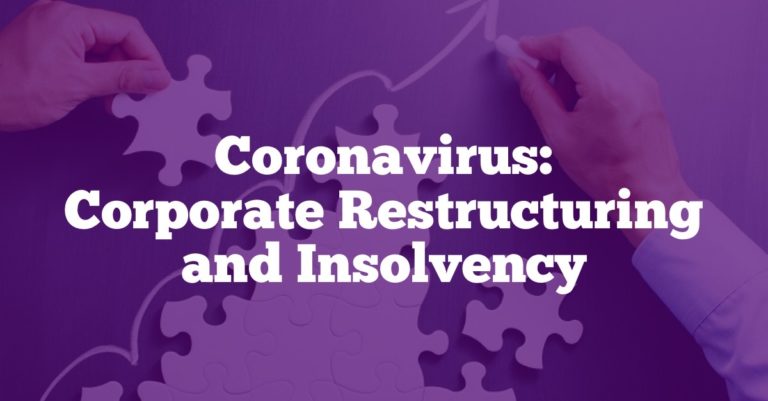 The coronavirus pandemic gives rise to the major risk of companies and small businesses going insolvent. In this article, I set out the restructuring and corporate rescue options for businesses in Malaysia. For example, companies can pursue the corporate rescue mechanisms under the Companies Act 2016. For small businesses who are sole proprietors, they may face bankruptcy. These individuals consider the voluntary arrangement under the Insolvency Act 1967.

Globally and in Malaysia

The Financial Times reported on 23 March 2020 (the report is behind a paywall) that the coronavirus threatens US$32 trillion of Asia corporate debt. The coronavirus has sparked a cash crunch that investors fear will cause a wave of insolvencies. Bloomberg reported on 22 March 2020 that Malaysia’s growth may be as low as 2% with the triple whammy of the coronavirus, low oil prices and the political change.

The immediate industry in danger is the airlines. The coronavirus pandemic may bankrupt most airlines worldwide by the end of May. Focus Malaysia reported that AirAsia, Malaysia Airlines, Malindo Airways and FireFly met with the Minister of Finance to seek financial aid.

Some countries have already reacted to this growing risk of insolvency by changing their laws. Germany will be introducing changes to firms facing liquidity problems by suspending legal obligations to file for bankruptcy. Australia will be making changes to their insolvency laws. The changes include raising the statutory demand threshold ten-fold from AUD2,000 to AUD20,000. Further, a debtor company has six months instead of just 21 days to respond to a statutory demand.

In Malaysia, companies can look to the restructuring and corporate rescue options contained in the Companies Act 2016 (CA 2016). Some common elements I will refer to below would be the moratorium and the involvement of an insolvency practitioner. The moratorium would allow a company to have a stay of all creditor actions and give the distressed company breathing space. The insolvency practitioner is a licensed liquidator and would play a mandatory role in some of the processes.

Further, individuals may face the risk of bankruptcy under the Insolvency Act 1967 (IA 1967). There is the pre-bankruptcy rescue mechanism known as the voluntary arrangement which I will deal with below.

#1: CVA – Only For Private Companies with no Secured Debt

The CA 2016 introduced the corporate voluntary arrangement, or CVA. It is one of the corporate rescue mechanisms. The CVA is a relatively quick out-of-court process. It is management driven in that it is a debtor-in-possession process.

First, the CVA can be utilised only by private companies and, in particular, where the company has no secured debt. This latter aspect has led to the criticism of CVA as a rescue tool and where we see the low usage of CVA. Only two companies have applied for CVA thus far.

Second, the debtor company will work with an insolvency practitioner to draw up the CVA proposal. Third, upon the filing of the necessary papers, an automatic moratorium applies to protect the debtor company. Fourth, a meeting of the company’s creditors will have to be held within 28 days of filing. Fifth, the creditors will vote on the CVA proposal and 75% creditors’ approval will be required to pass the proposal.

No further court order is required. On the moratorium, it only applies while the CVA is still pending creditors’ approval.

You can read more of the features of CVA in my earlier post.

#2: Judicial Management – Appears to Only Be for Unlisted Companies

Judicial management is the other corporate rescue mechanism. Unlike a debtor-in-possession process, this is where the management of the company will be placed in the hands of an insolvency practitioner.

Public-listed companies appear to be excluded from applying for judicial management. CA 2016 uses the phrase “a company which is subject to the Capital Markets and Services Act 2007” cannot apply for judicial management (see section 403(b) of the CA 2016). This has not been tested in the courts yet but it has largely been understood that public-listed companies fall within this phrase. This may be subject to court determination in the future.

Some of the key features of judicial management is then set out below.

You can read more on the features of judicial management in my earlier post.

#3: Scheme of Arrangement – For All Companies

The scheme of arrangement applies to all companies. It is a debtor-in-possession Court process where the company gets 75% approval by classes of creditors.

There are three stages in a scheme of arrangement.

At this stage, the company may also apply for a Court Order for an urgent moratorium known as a restraining order. However, unlike a CVA and judicial management, there is no automatic moratorium. The company will face difficulties in meeting the necessary requirements for a moratorium. I have written about the Barakah Offshore decision on this issue. The initial restraining order will last for not more than 90 days, and can be extended.

Second, with the Court Order to hold meetings of creditors, the company will hold the different meetings based on the creditor classes. The aim is to achieve 75% in value of creditors’ approval for each class.

Third, the company returns to Court to apply for sanction. The Court will approve the scheme once it is satisfied that all the statutory requirements have been met. The scheme will then become binding on all the creditors listed in the scheme.

Bank Negara Malaysia established the CDRC. It acts as a platform to allow for debtor companies and the financial institution creditors to work out a debt restructuring without the need to resort to formal court proceedings.

The CDRC route would allow for the company to try to resolve its bank debts with the CDRC acting as mediator.

The eligibility criteria is set out in CDRC’s Code of Conduct. Essentially, the criteria are:

Once CDRC has accepted the eligible company’s application, the financial institutions shall observe a standstill. This is in effect a moratorium by the banks and applies until CDRC further advises.

As the CDRC platform only attempts to resolve bank debts, the company will still face claims from its other creditors. So the company would still have to consider other restructuring and rescue options.

#5: Winding Up and Interim Liquidator

It may be the case that the company has failed in its restructuring options. Or, there are simply too many mounting creditor claims. The winding up of a company may be one option to preserve the remaining assets of the company and to allow a controlled sale of the company.

If the company can be continued as a still operating company, the liquidator may be able to carry out a sale at a better price.

More on the winding up laws in my earlier post.

As highlighted above, there are drawbacks or possible weaknesses in some of the above restructuring options. It may be that some of the provisions may be too restrictive in a time where companies will be fighting for survival.

One option would be of course to return to Parliament and to amend the CA 2016. But another option is a mechanism already built in the CA 2016.

These exemptions could be a temporary but very quick mechanism to allow companies to fully utilise all the corporate rescue options. In balancing the distressed company’s survival with that of the creditors’ rights, the Court can be the guardian against any abuse of the provisions.

Many small businesses will be sole proprietors. That means that the individual owner will be exposed to the risk of legal proceedings and eventually bankruptcy. In Malaysia, bankruptcy only refers to the insolvency of an individual.

First, the individual, ie. the debtor, will appoint a nominee. The nominee is meant to act as independent professional to oversee and supervise the voluntary arrangement. The nominee can be a chartered accountant, an advocate and solicitor, or such other person to be determined by the Minister.

Third, the interim order will grant protection. No bankruptcy petitions and no legal proceedings against the debtor except with permission from the court.

Fifth, the nominee needs to secure more than 50% in number and at least 75% in value of the creditors’ agreement. However, the secured creditors’ rights cannot be affected without their consent. If the approval is obtained, it will then be binding on all the creditors.

I have covered the changes to the bankruptcy laws here and you can find a copy of the voluntary arrangement rules here.