[Edit: The Federal Court, in its grounds of judgment dated 31 March 2022, has overturned this Court of Appeal decision. Bursa Malaysia does have discretion on the de-listing of a wound-up company.]

Wintoni Group Berhad (Wintoni) is a public listed company. Wintoni was wound up through a winding up order and the Respondent, Mohd Afrizan, was appointed as liquidator.

Although Wintoni was wound up, Bursa Malaysia had maintained the listing status of the company. However, Wintoni (under the control of the liquidator) did not make announcements on its financial statements and quarterly reports.

The High Court decided in favour of the liquidator’s judicial review. The Court of Appeal upheld this decision. The decision was also reported in The Edge Malaysia. 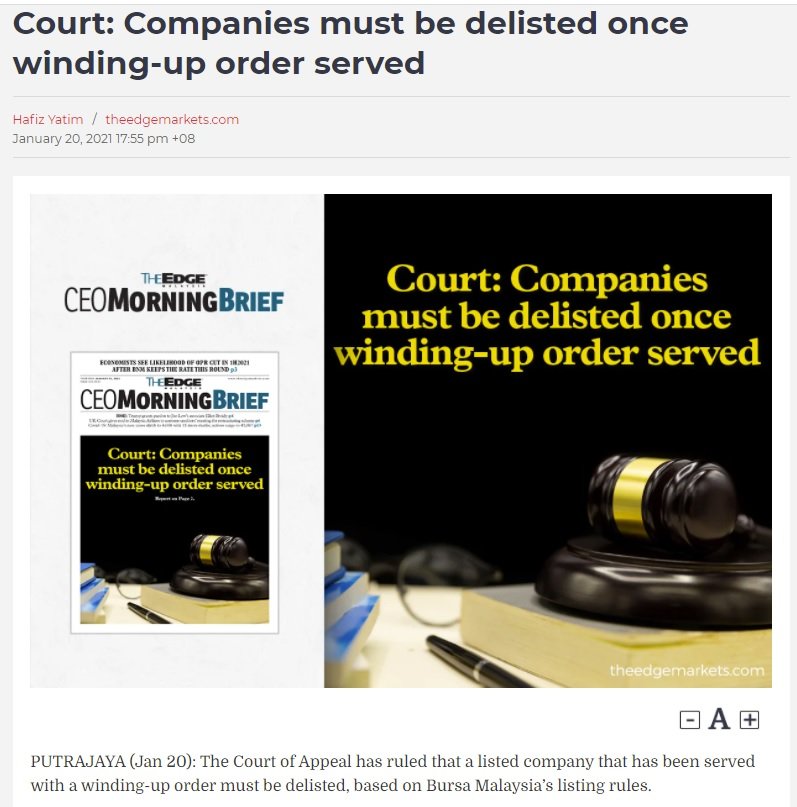 Wintoni is a public listed company listed on the ACE Market and was under the supervision of Bursa Malaysia pursuant to the ACE Market Listing Requirements (ACE LR).

On 17 August 2017, the Court made a winding up order against Wintoni. The Court appointed the liquidator, Mohd Afrizan, as the liquidator of Wintoni.

Bursa Malaysia did not de-list Wintoni. With Wintoni continuing to be listed, the liquidator was now the Controlling Person of Wintoni for the purposes of Rule 2.22 of the ACE LR.

On 20 September 2017, the liquidator provided an undertaking to Bursa Malaysia to comply with the ACE LR.

In March 2018, Bursa Malaysia conducted an inquiry against Wintoni on the delay in the announcements and issuance of Wintoni’s financial statements.

The liquidator responded that it was not his role or function as liquidator to do so. As Wintoni had ceased operations, he was not in a position to prepare the financial statements.

On 6 May 2019, Bursa Malaysia imposed a public reprimand on the liquidator and directed him to make the necessary arrangement including working with and/or delegating the function to Wintoni’s directors to ensure announcement/issuance of the financial statements within three months.

The liquidator filed judicial review proceedings at the High Court to challenge these decisions.

Separately, in September 2019, a contributory of Wintoni obtained an Order to terminate the winding up of Wintoni.

The High Court subsequently granted a stay of execution of its decision pending disposal of the appeal to the Court of Appeal (see Mohd Afrizan v Bursa Malaysia [2020] MLJU 1588).

The Court of Appeal then heard and dismissed the appeal.

The Court of Appeal identified that the key issue was whether it was mandatory for Bursa Malaysia to have de-listed Wintoni upon the making of the winding up order. This is based on the wording of Rule 16.11 of the ACE LR with the different usage of the words “may” and “shall“.

(1) The Exchange may at any time de-list any listed corporation or listed securities from the Official List in any of the following circumstances:

(2) The Exchange shall de-list a listed corporation in any one of the following circumstances:

(d) upon a winding-up order being made against a listed corporation.”

The Court of Appeal did not agree with the above arguments.

First, the Court of Appeal took note of the differences of the prescribed circumstances where Bursa Malaysia “may de-list” and “shall de-list” under Rule 16.11(1) and Rule 16.11(2) of the ACE LR.

The drafters of the ACE LR clearly distinguished the circumstances where discretion may be exercised and where the mandatory requirement becomes non-negotiable. The Court of Appeal applied a literal and strict interpretation due to the plain reading of the words.

Second, with that interpretation of Rule 16.11, the Court of Appeal found that for the judicial review challenge, it would be irrational, unreasonable and an act of illegality on the part of Bursa Malaysia to argue that it can exercise its powers under Rule 2.07(2) of the ACE LR to waive this mandatory requirement.

Third, the Court of Appeal did not agree with the argument on the public interest for the protection of investors under the CMSA. There continued to be the mandatory requirement to de-list Wintoni in conformity with Rule 16.11(2) of the ACE LR. The assets of the the company in liquidation are vested to the liquidator for settlement of the creditors.

The Court of Appeal was of the view that this would be consistent with the legal regime under the CA 2016. Upon the company’s winding up, the directors’ powers cease to operate because the court appoints a liquidator pursuant to section 477 of the CA 2016 and other winding up provisions of the CA 2016 apply:

Fourth, the issue of the undertaking given by the liquidator to Bursa Malaysia.

The Court of Appeal agreed that through signing the undertaking and in consideration of Bursa Malaysia allowing the continued listing of Wintoni, the liquidator had agreed to comply with the ACE LR. However, it was not a blanket, unqualified and unconditional undertaking. The undertaking was qualified by the words “in so far as the same apply to me.”

The Court of Appeal reiterated that that it had already found that it was mandatory for Bursa Malaysia to immediately de-list Wintoni upon the winding up order being granted. It followed that there was no duty imposed on the liquidator to ensure Wintoni’s compliance of the timely issuance of the financial statements.

Therefore, the Court of Appeal upheld the High Court’s decision in allowing the judicial review against Bursa Malaysia’s decision

The questions of law to be decided by the Federal Court are:

From the above questions of law, it will be interesting to see how the Federal Court addresses the powers and duties of the liquidators and directors of a wound up listed company.

On the one hand, the CA 2016 deals with powers of the directors upon the appointment of a liquidator. The CA 2016 makes a distinction between the three types of winding up.

In a members’ voluntary winding up, all the powers of the directors cease except where the general meeting of members with the consent of the liquidator or the liquidator sanctions the continuance of those powers. See section 445(2) of the CA 2016.

In a creditors’ voluntary winding up, all the powers of the directors cease except if the continuance of the powers is approved by the committee of inspection or the creditors. So, the liquidator cannot consent to the continuation of the powers. See section 450(6) of the CA 2016.

In a court winding up, the CA 2016 does not contain express provisions on the powers of the directors or the ability for the liquidator to consent to any continuation of powers. However, case law has long held that with the making of the winding up order, all the management powers of the directors cease. Instead, the management powers vest with the liquidator. See for instance, the Federal Court case in Lai King Lung v Merais Sdn Bhd [2020] 5 MLJ 614 (grounds of judgment dated 20 July 2020).

On the other hand, there is the argument that the directors’ duties under the Listing Requirements would not be abolished or extinguished even with the appointment of a liquidator.