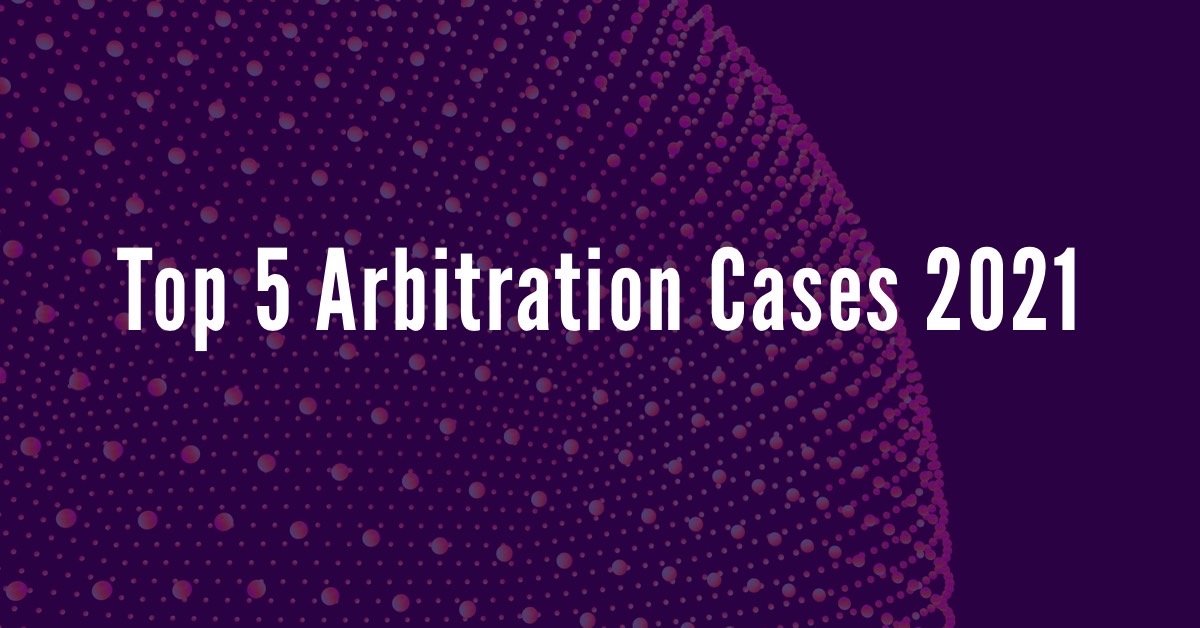 I feature the Top 5 Arbitration Cases in Malaysia for the year 2021. This follows the past editions of the 2020 cases and the 2019 cases.

This year-end review covers the issues on the seat of arbitration for West Malaysia and East Malaysia, the stay of arbitration proceedings, court reliefs after the issuance of the arbitral award, the availability of the Mareva injunction interim measure, and the grant of an anti-arbitration injunction.

The Federal Court ultimately ruled that the Kuala Lumpur High Court was the appropriate supervisory court. Hence, all of the enforcement or setting aside applications should have been filed in Kuala Lumpur.

This decision then shows the importance of the arbitration agreement itself stating that the seat of arbitration is: Kuala Lumpur/Peninsular Malaysia/which particular State of Malaysia/Sabah/Sarawak. Arbitrating parties can then avoid uncertainty and legal challenges.

Further, the 2nd Defendant also sought for a stay under section 10 of the Arbitration Act 2005 (AA 2005) of the court suit pending the same arbitration.

The decision demonstrated the wide conditions that the Court could impose when there is a stay under section 10 of the AA 2005. The Court was also prepared to order a stay of the arbitration proceedings itself in ensuring no inconsistency in the determination of overlapping issues.

The facts would make it easier to understand this case.

Danieli is an Italian company. It built a plant in Penang for Southern HRC, a Malaysian company.

The arbitral tribunal decided that Danieli had to pay damages to Southern HRC. In return, Southern HRC was to transfer the title of the Penang plant to Danieli.

Danieli wanted to have access to the plant for inspection. Southern HRC responded that it would only give Danieli access after Danieli paid the sums under the arbitral award. There was an impasse.

Southern HRC responded and challenged whether the court had jurisdiction to determine the matter and applied for striking out of the action. In essence, that the Court’s sole power in respect of the arbitral award was to enforce the award. The award itself could not give rise to any cause of action.

The Court upheld the strict application of section 8 of the Arbitration Act 2005 (AA 2005):

“No court shall intervene in matters governed by this Act, except where so provided in this Act.”

The Court held that once a foreign award is handed down, the court facilitation is limited to recognition and enforcement. The Court cannot grant any other relief in respect of a foreign award.

The High Court confirmed its jurisdiction to grant a Mareva freezing injunction pending the disposal of arbitral proceedings. This is under the interim measures of section 11 of the AA 2005. The Court read its section 11 powers widely.

The High Court held that the ability to grant an interim measure to “provide a means of preserving assets” is not confined only to the admiralty jurisdiction of the Court (as referred to in section 11(1)(c) of the AA 2005).

The High Court upheld the wide powers of the Court to grant interim measures under section 11 of the AA 2005. This power also included the discretion to grant other interim measures pursuant to its civil jurisdiction under the Courts of Judicature Act 1967.

In this case, the Court decided that there was no arbitration agreement between the parties and instead, the contract was subject to the exclusive jurisdiction of the Malaysian Court.

The High Court applied the American Cyanamid test of serious issues to be tried, the adequacy of damages and the balance of convenience.

One thought on “Top 5 Arbitration Cases in Malaysia 2021”