With the coming into force of the Companies Act 2016, a number of practical issues and questions have since cropped up. The Companies Commission of Malaysia (SSM) did release its helpful FAQ document. This document has been updated from time to time (presently, it has been updated up until 3 April 2017) and helps to answer the most frequently asked questions. Nonetheless, there are still other common issues arising from the Companies Act 2016. I come across these queries in my practice or at the talks that I give. I set out below 10 of these key issues. Companies can consider seeking further clarification or advice. These issues range from the constitution, dividends, director-related issues, and transitional matters.

Section 66 of the new Act continues to cause uncertainty and concern in the market. I had written about this provision earlier. Essentially, section 66(2) states that a document is validly executed by the company if certain signature requirements are met. For a company with more than one director, the signature requirement is that there must be two signatures, and with the director being a mandatory co-signatory.

SSM’s FAQ answer below attempts to explain the scope of section 66. But it does not fully address the uncertainty. Further, this FAQ answer may be persuasive but does not have force of law. 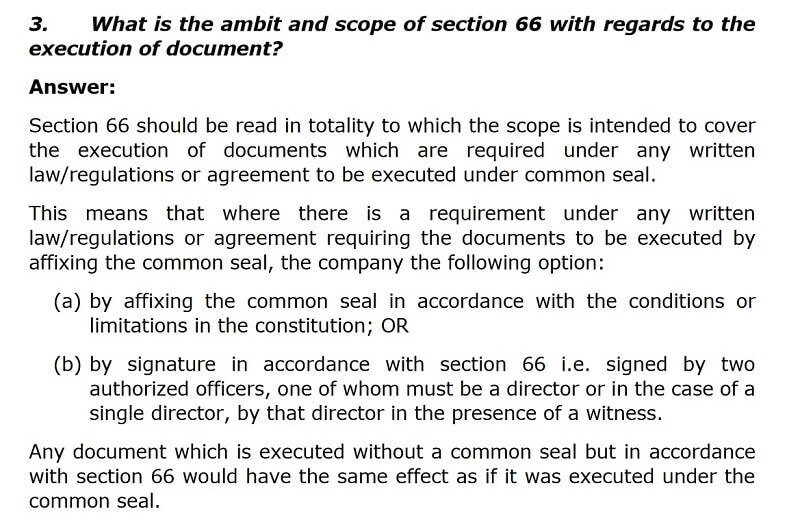 The answer to this concern may have to be resolved in the courts. If we look more into the law, the wording of section 66 is similar (but not identical) to the UK Companies Act 2006 provision.


The prescribed form for the Annual Return contains a new provision. Under Section F, it states that there has been due inquiries and that “none of the members of the company is holding shares as a nominee or trustee.”

The common query is then how to apply this solvency test. Directors are understandably concerned in ensuring they comply with the law. From my research, Australian case law is very useful in defining the various elements and in determining the ambit of this solvency test.

On a related area dealing with solvency, there has been a relaxation of the financial assistance provisions. The new Act allows for a whitewash provision. I have come across a number of transactions in attempting financial assistance. But there are still some uncertainties on the exact requirements and application of the whitewash requirements. Further, the prescribed form for the Solvency Statement on the SSM website may not exactly meet the solvency test requirements set out under the Act.

There were at least three versions of the SSM FAQ in addressing how companies were to set out their financial statements.

For example, for financial statements for the financial year ended 31 December 2016, that should be under the old Companies Act 1965 regime. But the directors’ report may only be made and dated in February 2017 which is when the new Act came into force.

The other ongoing issue is where the financial year may end on 30 June 2017. The company may be straddling both the Companies Act 1965 and the new Act.

This is a very live issue at the moment. It is not easy to interpret the exact scope of the new section allowing for the widening of the indemnity and insurance provisions. For example, a common issue is where a director presently bears a small percentage of the D&O premium. What can be allowed under the new Act? How will the existing policy and coverage be treated under the new Act? There are a host of other issues as well.

The change in law now mandates that directors’ fees and benefits payable must be approved in a shareholders’ meeting. This is the requirement for a public company, and a listed company and its subsidiaries.

For a private company, the directors can approve their own fees and benefits. This is subject to a disclosure requirement and the shareholders can still require the directors to call a general meeting to seek approval.

The common concerns then center on the exact definition of “benefits payable.” For instance, would a meeting allowance be classified as benefits payable? Next, for the situation of a listed company and its subsidiaries, what is the general meeting requirement? Would a general meeting be held at both the listed company level and each of the subsidiaries?

There are a number of permutations for this scenario and also uncertainties at the moment.

On this issue, our Act’s reference to “service contract” is quite similar to the UK Companies Act 2006. So the UK case law will come in useful in helping the interpretation and in answering the practical concerns.

#10: Transition of Winding Up

A common question I am asked is where there was a statutory demand issued under section 218 of the Companies Act 1965 at that time. Should the winding up petition be filed under the old Act or the new Act? Or should some other steps be taken? There are also other transitional or other winding up-related issues that I have come across.