As 2019 draws to a close, I wanted to feature five interesting Malaysian company law cases during the year. 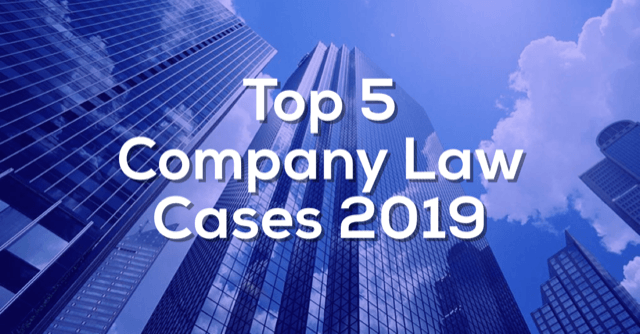 I have drawn from Malaysian decisions that advanced interesting points of law and has helped to develop company law and also the interpretation of the Companies Act 2016 (CA 2016). These cases range from the CEO’s fiduciary duty, the doctrine of a universal successor entity, and the chairman’s adjournment of general meetings.

This post is part of a 2019 trilogy that also features restructuring & insolvency cases, and arbitration cases.

I set out the five cases below.

This case reiterated that a chief executive officer (CEO) owes fiduciary duties to the company. It is not only a director who owes such fiduciary duties to a company. A CEO would fall into the category of very senior employees who are in a position of special trust and responsibility with regard to the management of the organisation and assets.

Further, section 210 of the CA 2016 also interprets the definition of a director to include the position of a CEO. Therefore, it is clear that the CEO owes fiduciary duties to the company.

Foreign companies seeking to undertake mergers in their countries will have comfort that such mergers are likely to be recognised in Malaysia by virtue of the doctrine of universal succession. The assumption of all assets, liabilities, obligations and rights by the successor entity will be recognised as a consequence of such mergers.

I have written about this case here.

#3: Blackstream – Powers of the Chairman of a Meeting

The case deals with important points of law regarding shareholder meetings.

First, the power of the chairman of the meeting to adjourn the meeting. In a shareholders’ dispute, or a contentious meeting where directors may be removed, the adjournment of the meeting can be critical to cut the legs out from a particular faction.

Under the company’s constitution, it will be common to have an express provision to allow for the chairman to adjourn the meeting. This is typically in the form of Article 50 of the Table A: “[t]he chairman may, with the consent of any meeting at which a quorum is present (and if so directed by the meeting), adjourn the meeting from time to time and from place to place.” But, independent of this express constitution provision, a chairman will have the common law power to adjourn.

Second, the Court also found that the chairman had wrongly decided that the decision on adjournment was to be voted by way of poll. This was wrong. It should have been just by way of show of hands.

Third, the chairman was also wrong in excluding the proxy holders from voting on the resolution for the adjournment. Proxy holders are allowed to vote on the question of adjournment.

Further to this, a written members’ resolution cannot be inconsistent with the company’s constitution (section 302(2)(a) of the CA 2016).

Second, Article 67 of Table A provides that the company may “by ordinary resolution passed at a general meeting” increase or reduce the number of directors.

The Court held that the application of Article 67 requires the appointment of directors to be done at a general meeting. Reading Article 67 along with section 302(2)(a) gave primacy to this requirement of an ordinary resolution at a general meeting to appoint additional directors. Therefore, the written members’ resolution alone appointing the additional director was held to be invalid.

The case fleshes out important legal issues on notice of a general meeting of a public company. The importance of these issues would determine whether the extraordinary general meeting could be held and whether the voting could proceed. If there is a dispute on these issues, then just like in this case, the company may be faced with an injunction to restrain the holding of the meeting or to restrain the voting of the resolutions.

Especially for a public listed company, who are the members of the company entitled to be given notice of the general meeting? The record of depositors is not static and subject to regular updating, and with shares being traded.

The legal position is that the members who are entitled to be given notice of the general meeting are those whose names appear in the record of depositors as at the date the notice issued for the general meeting to be convened is deposited with the company, i.e the requisition date.

The identities of these members of the company can be determined with certainty and without any difficulty. Once the relevant record of depositors is provided, the convener can then make the necessary arrangement to post the notice to these members at an appropriate date that would permit the notice to be given within the applicable notice period stipulated in the company’s constitution.