Earlier, I covered the top five Malaysian company law cases for 2019. To complete the series, I now feature the top five restructuring and insolvency cases in Malaysia for 2019. 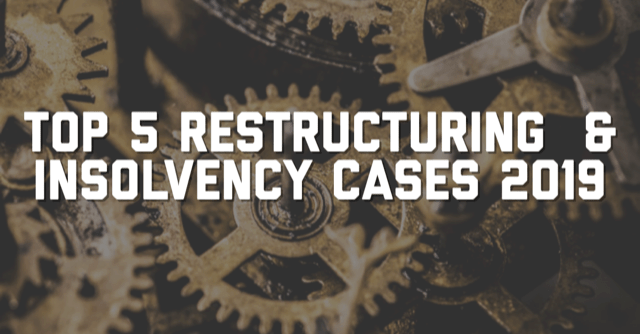 In 2019, we saw further developments interpreting the insolvency-related provisions of the Companies Act 2016 (CA 2016). I have selected these case due to the interesting and novel points of law.

The cases featured below range from judicial management, schemes of arrangement and the receiver’s ability to have continued supply of utilities.

A common feature of corporate rescue mechanisms is that there is to be a moratorium to stay legal proceedings against the distressed company. This allows breathing space for the company to restructure its debts.

First, the Court of Appeal decided that once the judicial management application is dismissed, there cannot be such a stay order to revive the moratorium effect.

Third, the Court must justly, economically and expeditiously dispose of the judicial management application and any appeal process.

Fourth, the Court of Appeal suggested that at the time of the filing of the judicial management application, there must be an element of bona fides. One bona fide approach suggested was for the applicant to write to all the concerned parties to obtain their views before the application is filed. The applicant is to disclose to the Court the creditors’ views.

Set out below are the findings by the Court of Appeal.

First, the company’s application in the first Court proceedings for leave to convene the scheme creditors’ meeting and for the restraining order ought to have been served on the relevant creditors. These were creditors that had ongoing legal actions against the company. The original Orders were obtained ex parte. This was an abuse of process and the Court of Appeal set aside the ex parte Orders.

Second, there was a further abuse of process when the company had filed in a second set of Court proceedings to seek sanction for the scheme of arrangement. But at that time, there was still the pending legal challenges before the first Court.

It is sometimes common practice for a company to first file an Originating Summons in the first court to obtain leave to convene the scheme creditors’ meeting. In the first set of proceedings, a restraining order may also be obtained. The next stage will involve the scheme creditors’ meeting to be held and where the voting takes place. After this meeting, the company would move on to  final stage to file a fresh Originating Summons to obtain Court sanction of the creditor-approved scheme. The fresh Originating Summons would likely be assigned to a second Court. It would be common practice to nonetheless disclose to the second Court all the proceedings that had already taken place and any ongoing legal actions.

Arising from this second point, it would be prudent to ensure that there is only one set of the same Court proceedings. This allows the same Court and the same Judge to have a holistic supervisory function over the entire scheme of arrangement process.

I am aware that leave to the Federal Court has been granted against this Court of Appeal decision. The leave question is whether an Order made pursuant to an ex parte application under sections 366 and 368 of the CA 2016 subsequently served on the creditors is an abuse of Court process which renders the entire court sanctioned scheme liable to be set aside.

This decision has important applications to debenture-appointed receivers, the employees where the place of employment is sold by a receiver, and to the debenture holder.

In this case, the receiver and manager appointed over Perwaja Steel sold the charged lands. The total proceeds from the sale would be insufficient to satisfy the debts of the debenture holders-financial institutions. The issue was whether the employees’ wages (all referred to under section 31 of the Employment Act) would have priority over the debenture holders’ debts. The priority provisions on debenture holders’ debts are set out in the CA 2016. So would the Employment Act prevail or the CA 2016 provisions prevail?

The Court ruled that the Employment Act was to take priority. This Act was a specific piece of legislation and with a social purpose. Giving priority to such employees’ wages may have a side effect undesirable to secured creditors. But that is perhaps a matter to be considered by the Legislature.

The upshot of this decision is that employees’ interests, and the calculation set out in section 31 of the Employment Act, are given priority. For receivership sales, the receiver and manager will have more certainty in how to assess the priority of the employees’ outstanding wages.

The case decided that when applying for a restraining order under a scheme of arrangement, the applicant must meet all the statutory pre-conditions even at the initial application stage. The effect of this decision is that it makes it more difficult for an applicant company to obtain an urgent restraining order. The creditors’ views must be sought first and this can be difficult if the company is already facing legal action. On the flip side, this decision protects creditors’ interests since they must be consulted first. But practically, in an urgent restructuring situation and if the company is facing legal action or winding up proceedings, it may not be feasible to have to obtain creditors’ views from the very start.

First, the High Court undertook a plain reading of the relevant provision i.e. section 368(2) of the CA 2016. The plain reading of the provision meant that any application for a restraining order must meet all the pre-conditions at the very start. In particular, the restraining order application must provide the name of an individual nominated by a majority of the creditors to be appointed as a director of the company undertaking the scheme of arrangement. This therefore requires the creditors’ views to be taken into account.

Second, the Court also looked at the legislative history of the introduction of the predecessor provision of section 176(10A). Malaysia is unique in imposing the four pre-conditions for the grant of a restraining order. The Explanatory Statement of the Bill stated that the introduction of these four pre-conditions was to make sure that “creditors are aware of an application” and that “specific conditions” needed to be met “to avoid any abuse.”

Reading this Barakah Offshore decision, and the Mansion Properties decision above, it appears that the existing language in the CA 2016 does not allow for urgent moratorium protection via a restraining order. A financially distressed company is not in a position to undertake a scheme of arrangement and to have urgent protection from legal proceedings in the meantime.

This decision allowed a receiver or receiver and manager to obtain a declaration under the CA 2016 to compel a provider of supplies (including utilities such as water, electricity, gas and telecommunications) to continue supply. This continued supply is subject to an assurance, undertaking or guarantee to pay for services and charges incurred during the period of receivership.

There are provisions in the CA 2016 that relate to this issue. Sections 392(6) and (7) of the CA 2016 essentially states that a receiver can make a request to the supplier for continued supply of. The supplier may make it a condition of giving supply that the receiver personally guarantees payment of any charges after the receiver’s appointment. Next, the supplier cannot make it a condition for continued supply that outstanding charges before the appointment of the receiver must be paid.

These provisions are meant to allow the receiver to stabilise and maintain the going concern status of an ailing company. Without a supply of essential utilities, a company in receivership would not be able to continue business and would shut down. This destroys value.

There is a similar provision under section 414(7) of the CA 2016 that also allows a judicial manager to utilise such a similar mechanism. These provision in receivership and judicial management also only refers to “any of the supplies including water, electricity, gas and telecommunications” but does not limit the type of supplies.

The High Court decision is found at Boulevard Plaza Sdn Bhd (receiver and manager appointed) [2019] 8 MLJ 732 (grounds of judgment). The Court dismissed the application. It held that chilled water did not come under the ambit of “supplies” in sections 392(6) and (7). The Court decided that those provisions governs public utilities and does not include chilled water.

By way of a Court of Appeal Order dated 16 April 2019, the High Court’s decision was reversed. There are no grounds of judgment that I am aware of.

The Court of Appeal granted the declarations sought by the receiver and manager to essentially compel GDC to continue supply of chilled water. The terms of the Order are that “upon the Receiver and Manager for the Appellant providing an assurance and/or undertaking and/or guarantee to pay for the services and charges incurred and to be incurred during the period of the receivership”, GDC “shall continue to supply chilled water and render all incidental services to the premises … pursuant to s 392(6) read together with s 392(7) of the Companies Act 2016”.

Due to the similarity in language, this decision would also have significance for a judicial manager who seeks to have continued supply to the company. As there are no grounds of judgment, it is not clear how section 392(6) and (7) was interpreted. The subsections does not have wording to compel a provider of supplies to continue with the supplies.