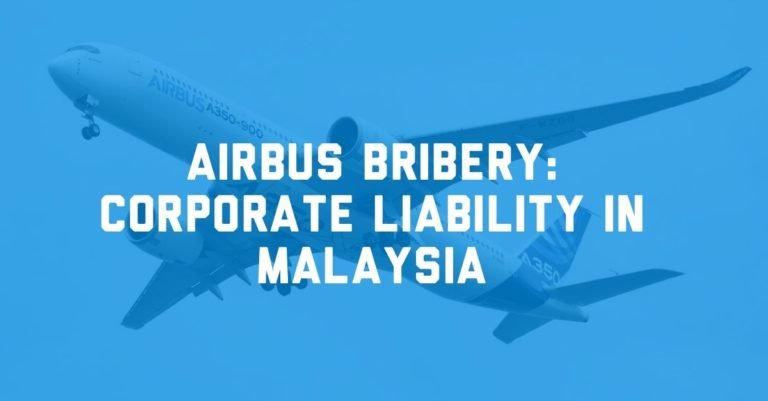 I set out six cautionary lessons for Malaysian companies arising from the Airbus US$4 billion global resolution for bribery involving authorities from the UK, France and the United States.

In the UK, Airbus faced five counts of failure of a commercial organisation to prevent bribery. This was under section 7 of the UK Bribery Act. This section 7 is a similar provision to Malaysia’s section 17A of the Malaysian Anti-Corruption Commission Act, known as the corporate liability provision. I have written about the elements of Malaysia’s corporate liability here.

You can read the UK High Court grounds of judgment in relation to the Airbus settlement through the deferred prosecution agreement. You can also read the detailed agreed Statement of Facts for all the background facts.

From the Airbus case study, I set out below six cautionary lessons for Malaysian companies, especially where we are on the brink of seeing the introduction of corporate liability on 1 June 2020.

In summary, persons associated with Airbus, including Airbus employees and other intermediaries, offered very substantial sums of money by way of bribes to third parties in order to secure the purchase of Airbus aircrafts.

The first category of ‘persons associated’ was what was referred to as Business Partners or BPs (sometimes referred to as intermediaries or agents) of Airbus. BPs were third parties used to increase Airbus’ international footprint and to assist it in winning sales contracts in numerous jurisdictions. When Airbus made a successful sale of aircraft, it would typically pay BPs a commission based on a percentage value of the sale, or a fixed amount per aircraft sold.

The second category of ‘persons associated’ were senior employees of Airbus itself. For example, several senior Airbus employees helped to facilitate a sports sponsorship agreement with certain airline executives.

In both the UK and Malaysia, a commercial organisation can raise the defence that it had adequate procedures in place to prevent the bribery or corrupt activity.

However, in the Airbus case, the High Court Judge noted the following (see generally [65] of the grounds of judgment).

First, Airbus did have bribery prevention policies and procedures in place. There were written policies which governed payment and contractual relationships with third parties, and Business Ethics Policy and Rules, and with detailed due diligence process to be undertaken. However, those policies and procedures were easily bypassed or breached. There existed a corporate culture which permitted bribery by Airbus business partners and/or employees to be committed throughout the world.

Third, the weakness of senior corporate oversight, and the seriousness of the offending overall, must be considered in the context of the increased awareness internationally of the pernicious nature of corrupt business practices. Also, taken into account was the obvious vulnerabilities of businesses operating in and selling in international markets, as Airbus does.

The Airbus entity was essentially a Dutch and French domiciled company. But Airbus accepted the extraterritorial effect of the UK Bribery Act.

There are certain advantages of a DPA as highlighted in the Airbus decision (see [119] of the grounds).

First, the DPA requires a significant financial penalty and this has an important deterrent message to corporate wrongdoers. Second, the DPA recognises and rewards what Airbus did to address the wrong, and there was a discount of 50% in the financial penalty. Third, the DPA gave Airbus the opportunity to demonstrate its corporate rehabilitation and commitment to effective compliance. Fourth, with the DPA, it avoids the significant expenditure in time and money in any prosecution of Airbus. Fifth, the DPA is likely to provide an incentive for the exposure and self-reporting of organisations in similar situations to Airbus.

At [74] of the grounds, the Judge noted the significant cooperation by Airbus in the investigation by the UK Serious Fraud Office. I set out some of the examples:

Airbus also took significant steps to demonstrate that it had fully transformed itself from past bad practices. These are noteworthy items to demonstrate the level of compliance and steps taken to stamp out future misconduct.

At [78] of the grounds, first, the Judge noted that Airbus now had a change in management team, with a largely different Board of Directors.

Second, Airbus conducted disciplinary investigations against existing and former employees. Since 2015, Airbus parted with 63 of its top and senior management employees.

Third, Airbus had commissioned an Independent Compliance Review Panel for a complete independent review of Airbus’ ethics and compliance procedures.

Fourth, Airbus Ethics and Compliance teams had been restructured to ensure functional independence from the business. There was a merger of legal and compliance functions and the change of the reporting line to the newly appointed General Counsel.

Seventh, and at [80] of the grounds, the Judge also noted other examples of steps taken by Airbus including:

In the UK, the Bribery Act provisions on personal liability of senior officers are different from the Malaysian corporate liability provision.

In the UK, it would have to be shown that the senior officer consented or connived to the committing of the bribery offence. This also applies only to the general bribery offences and bribing a foreign official, and does not apply to the section 7 Bribery Act corporate offence of failing to prevent bribery.

In Malaysia however, the corporate liability provision is graver. Where an offence is committed by the commercial organisation, it is then already deemed that the senior officer (i.e. director, controller, officer, concerned in the management of the company’s affairs) has also committed the offence. The burden then reverses on the senior officer to have to show that the offence was committed without his consent or connivance, and that he exercised due diligence to prevent the commission of the offence.

If it occurred to a Malaysian company, the facts of the Airbus case would have exposed the directors and senior management to a grave risk of personal liability under Malaysia’s corporate liability provision.