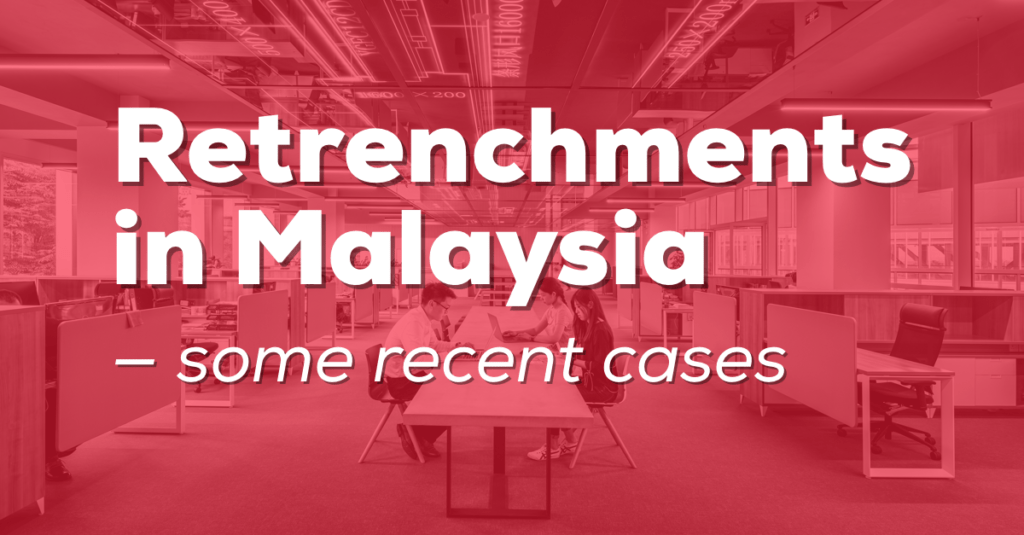 COVID-19 has had a devastating impact on jobs around the world. Almost every country has experienced an economic downturn, and as businesses struggle to steady the ship and stay afloat, many employers have been doing their best to retain their employees where possible. It has been a very busy 2020 for employment lawyers and HR professionals.

Unfortunately, for employers in many industries, COVID-19 has negatively affected their revenues too significantly, and cutting jobs has become the only solution to keep the businesses going. This has also been the case in Malaysia, where the Movement Control Order crippled many businesses, and the government has been unable to provide meaningful assistance to employers. For example, the aid provided under the Prihatin wage subsidy program is very low and short-term compared to other countries, and comes with conditions attached that make it impractical for many employers.

As a result, there have already been many retrenchments carried out in Malaysia, with even more to come. Indicative of the times, in the past couple of months, we have suddenly seen a significant amount of traffic on an old article I published here in January 2016 — “What you need to know about the law on retrenchment of employees”.

But retrenchments can be tricky. Over the years I’ve seen many employers make mistakes that result in unfair dismissal claims, a messy and costly court process, and sometimes very big court awards to be paid to former employees. Often, these mistakes are made even by employers who have done their research on the law, and sometimes even by those who have obtained legal advice (which ultimately turned out to be incomplete or flawed).

Knowing how to properly carry out a retrenchment exercise — and knowing what practical mistakes and missteps to avoid — comes with experience. It also helps greatly to analyse how other businesses have implemented retrenchments (both properly and improperly), and so in this article I set out very brief summaries of a selection of retrenchment-related decisions by the Industrial Court in the past year.

It would also be useful to read some of the previous articles I’ve published here, in particular the following:

These are the cases from the past year that I’ll briefly summarise below:

Reading the summaries will provide insights as to how the Industrial Court assesses the fairness of challenged retrenchments. Seeing what these employers have done right — and wrong — will be useful to HR professionals and in-house counsel of employers when planning and implementing retrenchments.

In the Tharmabalan Suppiah Velliah case, the employee was retrenched as part of a down-sizing exercise. One of the employee’s complaints was that the employer did not take any necessary steps to minimise its financial problems before implementing the retrenchment.

In respect of the first claimant, although there was testimony that her job functions had been outsourced, the company failed to justify how the outsourcing was a cost-cutting measure.

The Court concluded that the dismissals were unfair, and awarded each employee backwages of 14-15 months, and compensation in lieu of reinstatement of one month’s salary per year of service.

In the Ganesh Beloor Shetty case, the employee’s services were terminated on the grounds of retrenchment arising from redundancy as part of a restructuring. The company gave evidence that following a corporate amalgamation and restructuring, the employee’s role no longer existed, the relevant regional office had been closed down, and that the employee’s boss had also been made redundant.

The employee contended that his position as Head of Medical Affairs could not have been redundant, as it was compulsory for the company to have such a position to comply with the law. However, the court concluded after reviewing the relevant guidelines that there was no such requirement.

The employee claimed that he had not been given notice that a restructuring was being carried out. The company contended that the employee was in fact consulted and informed on two occasions in the preceding months. The evidence also showed that the employee was aware that his boss was retrenched earlier, and therefore the employee would have been aware of the ongoing restructuring. In any case, the Court pointed out that a failure to notify an employee of an impending retrenchment exercise does not automatically render the exercise unlawful, as long as it can be shown that the company acted in good faith.

The Court concluded that there was a genuine redundancy, and the retrenchment was made genuinely, and dismissed the employee’s claim.

The Anthony van der Wal case involved an employee who was retrenched having served the Company for 22 years. The Company’s reason for retrenchment was to centralise, simplify, and streamline its workforce due to adverse business conditions.

The employee refuted the Company’s assertion of being in an adverse situation, and contended that the Company was making healthy profits. The employee also provided a list of reasons showing that the Company’s actions globally showed that it was not facing financial challenges, including spending on non-essentials and lucratively remunerating executive directors.

The employee further claimed that his dismissal was not carried out fairly, and that the Company did not adhere with the Code of Conduct for Industrial Harmony. The employee said he was arbitrarily selected for retrenchment, as was not informed of the selection criteria. He was also not consulted prior to the dismissal, and the town hall sessions only generally addressed the reorganisation. The employee also said he was not genuinely offered an alternative position.

The Company provided evidence that the group on a global level had suffered losses, and the outlook was not good. The Company submitted that the group made a business decision that it was necessary to reorganise, and that it was entitled to do so. The Company contended that even if an employer was not suffering financial losses, it is still entitled to undertake a retrenchment exercise to ensure that it is kept afloat. It was also shown that 54 of the Company’s employees were made redundant as part of the reorganisation.

After scrutinising the evidence, the Court did find that the Company’s behavior did not reflect an adverse financial situation, but there was sufficient evidence to show that the Company was operating with a negative operating income in the preceding years. The Court also noted that the employee was offered an alternative position in England, but he declined due to the reduced salary.

The Court further pointed out that there was no legal obligation for the Company to consult the employee and give him early warning of the impending retrenchment, and that a lack of consultation would not automatically render the retrenchment male fide. In any case, the Court found that the Company did give ample notice — a newsletter was sent to all employees informing them of the need to reorganise, and townhall meetings were held outlining the retrenchment package.

The employee also claimed that the decision to cap his severance package at 7 months’ salary, and subject to preconditions, was an unfair labour practice. However, the Court said that once a retrenchment is found to have been genuine, a failure to provide sufficient compensation would not invalidate the retrenchment.

The Court was satisfied that the Company had proven its case, and dismissed the employee’s claim.

In the Mohd Zakir Yusoff case, the employee was issued with a letter of termination stating that he was being retrenched due to redundancy.

The Company contended that both the Company and its global group companies had been suffering financial losses, and challenging business conditions that necessitated a global workforce reduction. It was the Company’s position that the workforce reduction was genuine and motivated by the group’s poor financial position, and that there were 15 employees made redundant across different jurisdictions. The employee’s performance was not an issue.

The employee disputed his redundancy, and contended that his position was taken over by another recently-hired individual. Further, the employee argued that the Company advertised 3 positions covering similar job functions 5 months after he was made redundant.

The Court found that the evidence submitted by the Company of its financial difficulties was not convincing. The maker of one of the financial statements was not called to give evidence, and so the employee’s counsel could not cross-examine him/her, which made the accuracy of the information questionable. The Company also failed to explain material contradictions in one of the financial statements. The maker of one of the audited accounts submitted was also not called to testify, and the Court found that some of the figures were contradictory. The Court concluded that the documents submitted were suspicious and disputable, and therefore the Company failed to prove that it had been suffering losses.

The Company also contended that the employee was selected for retrenchment over another recently-hired employee because he did not speak Mandarin, but the Court deemed this to be an afterthought, as it was not given as a reason at the point of termination.

The Court concluded that the Company had failed to prove a genuine redundancy, and that the employee’s services, job functions, duties and responsibilities existed at the time of his dismissal, and continued to exist thereafter. The Court awarded the employee backwages of 15 months, and compensation in lieu of reinstatement of one month’s salary per year of service.

One thought on “Retrenchments in Malaysia — some recent cases”