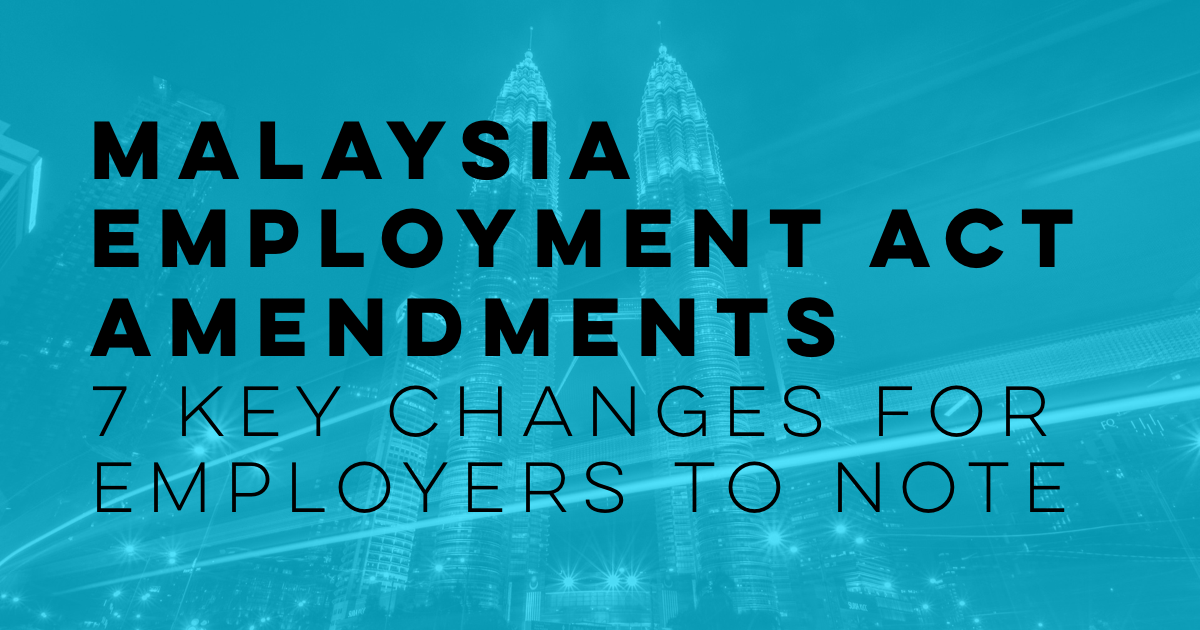 [Update: The Bill was tabled for its second reading and passed on 21 March 2022. There were only two minor amendments from the first draft which was the subject of this article, in relation to maternity and paternity leave. These have been updated in the text below.]

Comment: This is welcome, and is long overdue. The government has been promising to legislate this since 2017. Public sector employees have been entitled to 90 days paid maternity leave for several years now.

(2) Restriction on termination of pregnant employee

Comment: These changes provide much greater protection to pregnant employees from being dismissed from their employment. The existing provisions of the EA [at Section 42(1)] only protect a female employee from being dismissed if she is absent for up to 90 days post maternity leave due to illness arising from her pregnancy that renders her unfit to work. A notable effect of the protection being put forward by the Bill is that employers cannot terminate the employment of a pregnant employee for poor performance, or as part of a retrenchment exercise arising from redundancy.

Comment: Again a much welcome and overdue change, though obviously 3 days is well short of international standards. Public sector employees have been entitled to paid paternity leave (3-10 days) for several years now.

The change: Pursuant to the Bill, employees will be able to submit a written application to their employer “for a flexible working arrangement to vary the hours of work, days of work or place of work”. An employer who receives such an application will be required to approve or refuse the application within 60 days, and if it is refused, the employer must “state the ground of such refusal”.

Comment: This is an interesting change, but arguably is just performative, with no real impact. The employer is under no obligation to reasonably consider these applications, or to provide fair or reasonable grounds for refusing them.

The change: The Bill seeks to introduce a new Section 69F. which gives the Director General the power to “inquire into and decide any dispute between an employee and his employer in respect of any matter relating to discrimination in employment [and] make an order”. Non-compliance by an employer with such an order would be an offence.

Comment: As Malaysia is notably lacking in terms of any discrimination protection, this is a move in in the right direction. However, the new provisions are very vague. There are no details at all in terms of what sort of “discrimination” is being addressed, and no indication of what types of orders the Director General may make pursuant to these new powers.

The change: The Bill introduces a new Section 81H, which requires employers to “exhibit conspicuously at the place of employment, a notice to raise awareness on sexual harassment”.

Comment: This is another very vague provision. There are no details at all regarding regarding what this “notice” must state, and really does appear to be something that was pencilled in to tick off the box of doing something about workplace sexual harassment.

The change: The Bill proposes a new Section 18A, which introduces a formula for calculating wages where an employee has not worked a full month. The new Section 18A provides that “notwithstanding Section 60I” (which I will explain below) the formula to be used to calculate the wages due in these circumstances is: [(Monthly wages / Number of days of the particular wage period) x Number of days eligible in the wage period]

Comment: This provides welcome clarification, as this is often an administrative issue for HR/payroll. However, there may be confusion regarding the Section 60I mentioned above, as Section 60I — which only applies to Part IX (Maternity Protection) and Part XII (Rest Days, Hours of Work, Holidays, and Other Conditions of Service) — provides the following formula for determining the “ordinary rate of pay” for employees employed on a monthly rate of pay: [monthly rate of pay / 26]

One general drafting comment I would like to add is that there is an overall confusion regarding whether the Bill seeks to expand the scope of the EA to beyond the existing definition of “employees”. Currently, employees who fall within the scope of the EA (“EA Employees”) are those defined in the First Schedule — generally, those earning up to RM2,000/month or engaged with manual labour. This legal separation of EA Employees and non-EA Employees has long been a feature of Malaysian employment law, and certain provisions of the EA which are intended to apply to both EA Employees and non-EA Employees would be specifically carved out and stated as applying to all employees.

However, many of the drafting changes proposed by the Bill seem to be contradictory, and appear to be drafting mistakes. Some brief notes on this:

There are many welcome changes proposed under the Bill. However, while these changes move industrial relations in Malaysia in the right direction, many of them are too shallow, and too bereft of detail to make a material impact. I would hope that, as the Bill goes through Parliament, constructive feedback will be provided, and some of these new provisions can be reworked and strengthened before the Bill is finalised.