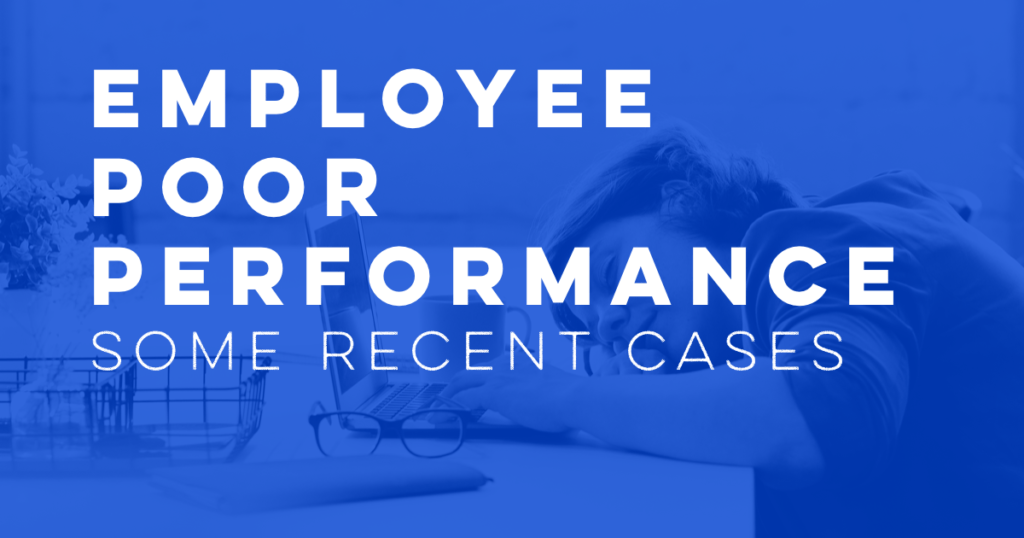 The proper management of under-performing employees is always a tricky proposition. While the law recognises poor performance as one of the reasons that would constitute “just cause” for dismissing an employee, many employers make mistakes which result in dismissed employees winning unfair dismissal claims. There have also been instances where employees have been able to walk out and claim that they have been constructively dismissed due to the employer putting them on a performance improvement plan (“PIP”).

There are many variables that will determine whether a poor performance termination was carried out fairly. It’s always useful for employers and decision-makers to review how other employers have managed under-performing employees. In this article, I briefly summarise the following recent cases related to PIPs and poor performance dismissals:

These summaries will provide valuable insights on the issues the Industrial Court considers when assessing performance-related terminations.

In the Azura Norden case, the Claimant was unhappy at being given an annual performance rating of 1 out of 5, and subsequently being placed on a 3-month PIP. This led the Claimant to resign and treat herself as constructively dismissed. The Claimant contended that there was a sequence of actions by the Bank as part of a reorganisation exercise that were malicious, unfair, unlawful, and served to victimise her, and the poor performance review and PIP was the straw that broke the camel’s back.

The Court stated that it would be assessing whether the Claimant’s grievances satisfied the “contract test” in Bayer (M) Sdn Bhd v. Anwar Bin Abd Rahim [1996] 2 CLJ 49 — a High Court decision which was subsequently upheld by the Court of Appeal and Federal Court. In essence, this means that in a constructive dismissal claim, an employee cannot deem himself constructively dismissed because his employer has acted “unreasonably”. In order to succeed in a constructive dismissal claim, the employee must prove that “the employer is guilty of a breach which goes to the root of the contract or the employer has evinced an intention no longer to be bound by it.” It is settled law that four conditions must be satisfied, which is that — (i) there must a breach of contract by the employer; (ii) the breach must be sufficiently important to justify resignation; (iii) the employee must leave due to the breach and not for any other reason; and (iv) the employee must leave immediately.

The Court listed the following four events to be assessed in deciding whether there was a breach of contract by the Bank entitling the Claimant to claim constructive dismissal:

Based on the evidence presented, the Court decided that the Bank’s transformation program and restructuring were genuine and not with any ulterior motive. There was no “demotion” as the redesignation did not involve any changes to the Claimant’s rank, job grade, remuneration, or contractual privileges. The Claimant’s contract also did not entitle her to a private office room.

The Court referred to the High Court decision in Tokio Marine Insurans (Malaysia) Berhad v. Tan Kooi Luang & Anor [2014] 1 LNS 1839, where it was held that, where an employee claims to have been victimised, the burden is on the employee to provide evidence to prove it on a balance of probabilities. In this case, the Claimant admitted that there was a company-wide transformation program and that there were multiple restructurings that took place that year. There was no evidence that the changes made involving the Claimant was done with any ulterior motive, and the Court found that the redesignation was “a normal process which was done well within the managerial prerogative of the Bank”.

Regarding the performance assessment, the Court said that “the employer is the best person and is well within its prerogative to assess the performance of the Claimant” and that this assessment cannot be said to have been a breach of contract. The Court also reiterated that it “is not in the business of interfering in an employer’s assessment of an employee”. The Court found that it was reasonable for the Bank to ask the Claimant to participate in the PIP, and that the Claimant was not the only employee placed on a PIP. To support this position, the Court cited the case of Wasudevan Shridathan v. The New Straits Times Press (Malaysia) Berhad (Award No. 1872 of 2018), which held that being placed on a PIP is not grounds to claim constructive dismissal.

The Court concluded that the Claimant failed to establish that she was constructively dismissed, and had left the Bank on her own volition, and therefore dismissed her claim.

The Claimant in the Charles Selvam case had a positive track record with the Company, including receiving a special recognition award praising his “capabilities, dedication and excellent contribution”. He was given a satisfactory performance rating, which was later changed to “unsatisfactory” without his knowledge. The Claimant was then placed on a 3-month PIP, which had vague targets and objectives, and was not properly monitored. Although the PIP stated that the Claimant’s progress would be monitored bi-weekly, there were only 2 review meetings in 3 months. The Claimant objected to being placed on the PIP, and further objected when his PIP was extended for a further 3 months. The Company did not respond to these objections. The Claimant was subsequently dismissed on the grounds of redundancy.

In its award, the Court said that it “cannot over emphasise the importance of acting fairly in managing a case of genuine poor performer” and cited the case of IE Project Sdn Bhd v. Tan Lee Seng [1987] 1 ILR 165 (Award No. 56 of 1987): “An employer should be very slow to dismiss upon the ground that the employee is found to be unsatisfactory in his performance or incapable of performing the work which he is employed to do without first telling the employee of the respects in which he is failing to do his job adequately, warning him of the possibility or likelihood of dismissal on this ground and giving him an opportunity of improving his performance. It is for the employer to find out from the employee why he is performing unsatisfactorily and to warn him that if he persists in doing so he may have to go.”

The Court concluded that the Company had failed to prove that the Claimant’s termination had been with just cause, and therefore the dismissal was without just cause or excuse. The Claimant was awarded RM474,166.67 (24 months’ backwages, less 10% for post-dismissal earnings, less termination benefits already paid, and plus two month’s salary as compensation in lieu of reinstatement for two years of service).

In the Thomas Kuruvilla case, the Claimant had been with MDEC for 10 years, and had no prior performance issues. After a new CEO was appointed, a reorganisation exercise took place, and the Claimant was transferred to various new divisions and departments, placed on PIPs, and then dismissed on the grounds of being a poor performer. The Claimant’s complaint was on the basis that he was not a poor performer, should not have been placed on the PIPs, had been transferred to new job functions without proper support, given unrelated KPIs and insufficient guidance, and was victimised by MDEC.

The Court held that, while an employer is the best person to judge the performance of an employee, this was provided that “the conduct of the employer is not actuated and/ or tainted with malice or bad intention”. The Court found that, prior to the appointment of the new CEO, the Claimant “had been a glowing employee” with “a clean record of service” and “no issues relating to his performance”.

However, after the new CEO’s appointment, the Claimant was transferred to various new divisions and departments for reasons which were unclear, and “given conflicting, backdated, transfer orders which had also called into question the real motive and/or genuineness of the transfers”. The Court also found that there had been “delays in setting the KPIs, thereby reducing the period for its achievement” and “the extent of his duties had not been properly defined and demarcated”. Further, the assessment of the Claimant’s performance was done inconsistently and “without adequate justification” and “no satisfactory answer had been given by the Company as to why his ratings had needed to be recalibrated to make him a non-performer”.

In its award, the Court also stated: “The Company’s actions of placing him on a second PIP in a different work setting, with various changes in job functions and where the assigned KPIs had not been a part of his job description, had shown that it had not truly been living up to its expectations in assisting or encouraging a poor performer (if any) to improve but rather had been putting various obstacles in his way with the view to frustrating and demoralising him.” The conclusion from the evidence was that the Claimant “had been extended very little or no support or guidance”. In relation to the second PIP, the Court found that it “had been for a shorter time than that agreed and it had lacked clarity“, the Claimant was assigned tasks outside his scope during the PIP process, and that “the second PIP had not given him adequate time to accomplish the tasks assigned to him”.

The Court offered further guidance for performance managers, stating: “Performance managers have a duty to ensure that an employee coming under their supervision is given adequate support and supervision in order for the employee to achieve the deliverables and KPIs.” The Court also said that “placing a well performing employee […] in a new setting within the company, without adequate support and assistance and thereafter suggesting that he had not been performing well and had needed improvement, had not reflected that the company had treated him well and fairly” and that the constant changes “could not be regarded as fair labour practice if the resultant effect would be to continuously put him in a state of confusion and difficulty that would invariably cause deterioration to his performance and efficiency.” It was further observed that the Claimant “had not been properly informed of his alleged shortcomings in his KPIs and performance ratings (if any) wherein there ought to have been a proper assessment, appraisal and notification of his area(s) of improvement” and that “the evidence had shown that before he could appreciate and absorb his weaknesses and strengths (if any) upon being given his final rating on his individual KPI, he had been transferred to another division, twice.”

Having considered the evidence, the Court concluded that MDEC’s handling of the PIPs was flawed. The Court found that the Claimant was not accorded sufficient opportunity to improve, or given adequate guidance and assistance and that placing the Claimant on the PIPs “had been an act of victimisation” and that MDEC “had clearly driven him to an extent that his performance had deteriorated”.

The Court concluded that the Claimant was dismissed without just cause or excuse. The Court ordered MDEC to pay the Claimant RM810,628.00 (24 months’ backwages, plus 10 months’ salary as compensation in lieu of reinstatement for 10 years of service).