END_OF_DOCUMENT_TOKEN_TO_BE_REPLACED

In summary, these 3 areas are:

END_OF_DOCUMENT_TOKEN_TO_BE_REPLACED

Bloomberg Malaysia came across my earlier TML post on the Companies Bill and invited me on their show  to have a short chat. I was a bit nervous leading up to it, with it being my first TV interview. But I am glad I got to share my views on the new Bill.

I spoke about how the new laws would transform the corporate landscape, spur entrepreneurship and also strengthen corporate governance. 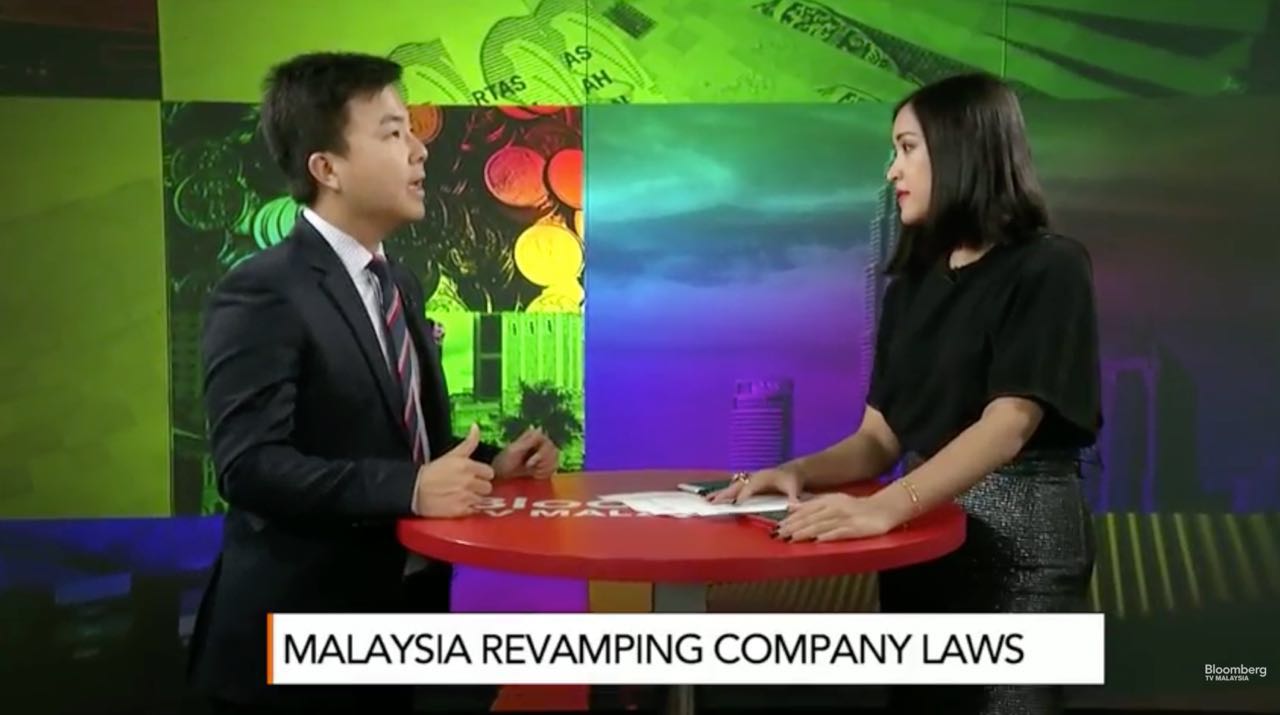 That whole experience felt a bit like Suits meets The Newsroom. A lawyer getting a small glimpse into the inner workings of a news studio.

Bloomberg has also uploaded the clip on their YouTube channel and you can view it below.

END_OF_DOCUMENT_TOKEN_TO_BE_REPLACED

Parliament passed the Companies Bill 2015 this evening. It was first tabled for Second Reading on Thursday 31 March 2016 and Parliament continued and concluded its debate on 4 April 2016.

[update: The Bill has received Royal Assent on 31 August 2016 and has been gazetted on 15 September 2016 as the Companies Act 2016. I have written briefly about this in my latest post.]

I had previously written on some of the upcoming changes, especially on the challenges that directors may face and I was also featured on The Edge TV.

The new Companies Act will undoubtedly transform Malaysia’s corporate landscape. Underpinning the changes are the aims of spurring entrepreneurship, making the corporate vehicle more attractive for businesses, deregulating certain aspects of the corporate process, and to introduce the concept of corporate rescue for ailing companies.

It is anticipated that the new Companies Act itself will not be brought into force until a year’s time or so. This is because the new regulations, rules and guidelines will still need to be drawn up.

I set out below 7 of the more significant areas we will see in the new Companies Act. END_OF_DOCUMENT_TOKEN_TO_BE_REPLACED

This post is a part of a series based on my Law for Startups workshop at MaGIC in September 2015. It’s a basic introduction to legalities for startup founders. You can access the slides here.

Read the earlier posts for context:

One of the earliest decisions that a startup or small business founder will have to make is choosing the right business vehicle through which the business/idea will be carried out.

The most common business vehicle options in Malaysia are —

END_OF_DOCUMENT_TOKEN_TO_BE_REPLACED

I was interviewed by The Edge Financial Daily and I shared my views on some of the challenges that directors will face under the upcoming Companies Bill.

“It’s not an easy balancing act to be done. But if you are speaking from the perspective of minority shareholders or even shareholders, I would say they will be welcoming these changes because there is more information, and the directors have to allow a platform for the shareholders to discuss, query, ask questions, even if it’s not contained specifically in any audited accounts.

“Free flow of information is quite welcomed,” Lee told The Edge Financial Daily after presenting his paper “New Companies Bill: Upcoming Changes and Impact on Directors and Shareholders” at the Malaysia Legal and Corporate Conference on Oct 7.

Although Lee welcomed the greater flow of information and interaction between the board and the shareholders, he warned of the possibility of shareholders abusing the new privileges to the detriment of the company and its operations.”

My views in The Edge were also briefly discussed on the BFM Morning Run on 19 October 2015.

It appears from the Parliament website that the Companies Bill 2015 was tabled for its First Reading on 19 October 2015 and for the Second Reading on 20 October 2015. So we are now in the process of ushering in the new laws.